Starring Amit Sadh in the lead role, Zidd also features Amrita Puri, Sushant Singh and Aly Goni in pivotal roles. The series has been directed by ad filmmaker Vishal Mangalorkar and will see Sadh in a never-seen-before role. 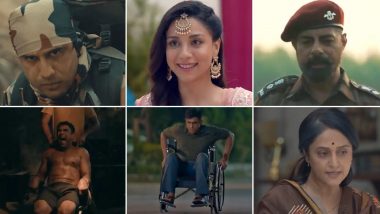 Amit Sadh is back with yet another project that guarantees a performance-oriented role of the actor. He will be seen playing real life Kargil hero Indian Army Major Deependra Singh Sengar in ZEE5's next web series Jeet Ki Zidd. The web-series, bankrolled by Boney Kapoor, sees Sadh play the Army Officer who after facing set backs twice during his service in the Army, decided that there was more to life than giving up, thus setting an example to one and all. Zidd Teaser: Amit Sadh's Zee5 Series About Valour Looks Jaw-Dropping Good (Watch Video).

The makers released the trailer of the web series that will premiere on January 22, 2021 on ZEE5. The trailer sees how despite facing all odds and a heartless commander, Deep becomes an Army officer, only to have his journey cut short during a mission. The trailer then sees Sadh's character refuse to give up on living life as a paralytic and get bac on his feet. Aly Goni Opens Up On Digital Debut With Boney Kapoor's Zidd, Reveals He Waited A Long Time and Let Go Many Opportunities For the Right Break.

Starring Amit Sadh in the lead role, Zidd also features Amrita Puri, Sushant Singh and Aly Goni in pivotal roles. The series has been directed by ad filmmaker Vishal Mangalorkar and will see Sadh in a never-seen-before role. Thr actor also underwent a major physical transformation to play the role of the Army Major, and we clearly see the results.

The official synopsis of Jeet Ki Zid reads, “Jeet Ki Zid is a ZEE5 Original action thriller series starring Amit Sadh, Amrita Puri, and Sushant Singh. Based on a true story, the series is an inspiring tale of a soldier whose never give up attitude helps him overcome tough challenges and turn the impossible into possible.”

(The above story first appeared on LatestLY on Dec 29, 2020 06:02 PM IST. For more news and updates on politics, world, sports, entertainment and lifestyle, log on to our website latestly.com).