Kapil Sharma and Ginni Chatrath to Now Host a Wedding Reception in Delhi, Check Out the Invite 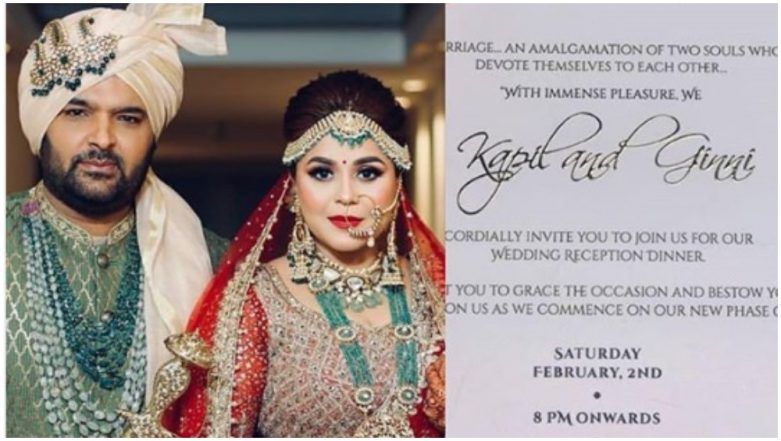 Comedy King Kapil Sharma and Ginni Chatrath's wedding festivities are far from over. The newlyweds is all set to host yet another reception, in Delhi. Yes, you read that right! Kapil and Ginni have now invited their industry friends to party with them on Saturday, as they will throw a bash in New Delhi. The wedding reception invitation card is being shared on social media by several fanpages. While the reception will happen on February 2 and the celebrations will begin at 8 pm, the venue is yet to be revealed. Kapil Sharma and Ginni Chatrath’s Invitation Card Is Here and It’s Simple Yet Beautiful

The pair hosted a reception in Amritsar for their local relatives and friends on December 14 and in attendance were Bharti Singh, Kruhsna Abhishek, Sumona Chakravarti, and many others. They hosted another reception in Mumbai on December 24, which was attended by stars like Deepika Padukone, Ranveer Singh, Anil Kapoor, Karan Johar and others.

Kapil and Ginni tied the knot on December 12 in a lavish ceremony at The Grand Cabbana resort of Jalandhar in the presence of their friends and family. Just like the recently-wedded Ranveer-Dipika and Nick-Priyanka, the couple had two weddings - a Sikh wedding first, which was then followed by a Hindu ceremony. The couple’s wedding pictures, that were doing the rounds on social media, are being loved very much. Needless to say, the newlyweds looked perfect together.

One more wedding reception for #kapilsharma and his wife in delhi 😍

On the professional front, Kapil Sharma, who had been missing from the limelight following allegations of unprofessional behaviour, made his comeback on the small screen with the new season of The Kapil Sharma show which aired on  December 29, 2018. Along with Kapil, other comedians including Bharti Singh, Krushna Abhishek, Kiku Sharda, Chandan Prabhakar, Sumona Chakravarti, and others entertain the viewers. Watch this space for further updates.