Amitabh Bachchan's quiz show KBC 12 is all set to come to an end on January 22, 2021. And as per the promo, the finale will be celebrating the Kargil war heroes, Param Vir Chakra awardees Subedar Major Yogendra Singh Yadav and Subedar Sanjay Singh. Watch! 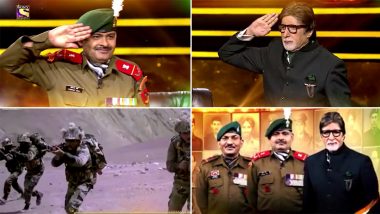 Amitabh Bachchan hosted game show Kaun Banega Crorepati 12 is coming to an end on January 22, 2021. The finale episode will be aired on the said date where it’s going to be all about the Kargil War heroes. The makers have released a video on the channel’s official social media which sees Big B welcome the veteran armymen of the county. The megastar also recites a poem in their honour and that’s how he honours them. Having said that, it’ll be interesting to watch how much money Param Vir Chakra awardees Subedar major Yogendra Singh Yadav and Sanjay Kumar will take home. Kaun Banega Crorepati 12: Know More About Dr Babasaheb Ambedkar’s Manusmriti Dahan Din, That Landed Amitabh Bachchan’s Quiz Show in Controversy.

The promo starts with Amitabh’s voice introducing the two heroes and ends on the superstar saluting the men in uniform. Indeed, the show cannot have a better end than this. This year KBC 12 was different as it was shot amidst the pandemic wherein the show was sans any audience. This finale episode will surely churn a huge TRP as who would not like to see the Kargil heroes on the hot seat.  Kaun Banega Crorepati 12: Amitabh Bachchan Fulfils His Promise, Follows Second Crorepati and IPS Officer Mohita Sharma on Instagram!

Going by the glimpse of this Kargil hero special episode, we feel it is going to be quite an amazing one. Having said that, this year, KBC witnessed four crorepatis and all of them have been women. Fans will surely miss the show, So, are you excited for the finale? Stay tuned!

(The above story first appeared on LatestLY on Jan 21, 2021 08:19 PM IST. For more news and updates on politics, world, sports, entertainment and lifestyle, log on to our website latestly.com).