FIR fame Kavita Kaushik is all set to enter Bigg Boss 14 and what a better tribute to her than lauding some if best fashion pieces from Instagram. Check it out. 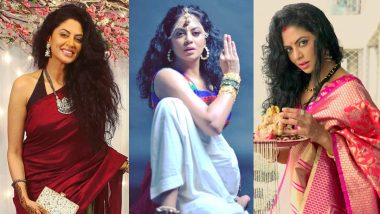 Television actress Kavita Kaushik has entered the Bigg Boss 14 house as a wild card contestant and we are damn excited. She is a well-known face from the Telly world who made her debut into the showbiz with Ekta Kapoor's Kutumb (2001). Later, in her career, she started getting offers and was seen in many hit daily soaps like Kahaani Ghar Ghar Ki, Kumkum and even Remix. However, it was FIR which gave her the recognition she deserved. And so after seeing her playing these many roles on TV, it'll be interesting to see the real Kavita on the reality show. Bigg Boss 14: Kavita Kaushik and Naina Singh All Set To Enter As Wild Cards On Salman Khan's Weekend Ka Vaar? (Watch Video).

It was on Salman Khan's Weekend Ka Vaar when she entered the show. Well, we all know that Kaushik is a strong woman, but there's this glam side of her which very few are aware of. And so, we decided to take a scroll through her Instagram feed and boy 'stunning' is the word. As now, as she is locked inside the house, we show you seven glammed up pics of the actress that are just wow. Check it out. Kavita Kaushik Slams An Instagram User Who Sent Her Pics of His Private Parts, Files A Police Complaint (View Tweets).

First Things First, That Was Her Thigh-High Slit Dress For The Bigg Boss 14 Night!

Up Next, We Have Kavita Explaining The Real Meaning Of Accessories!

When On Beach, Flaunt Your Bod!

My small paradise in Goa, i love to run to this place after each achievement/project/even during festivals, the wonderful owners are going through major losses as no foreigners due to the pandemic , so like minded people pls book your stay now and we might bump into each other this season, @artresortgoa #artresortgoa #beachlife

Saree Is A Girl's Best Friend!

Kavita In A Banarasi Six-Yard And We Are Stunned!

Wish you all a safe and happy Ganesh chaturthi ❤🙏

A Pastel Pink Kurta And That Grin...What A Fantastic Combo!

Challenge accepted @sayantanighosh0609 @simrankaurhundalofficial ❤ Thanks for choosing me , love and light 💖

Well, we are really mesmerised after looking at the above images. Definitely, Kavita is going to be a kickass player on the show owing to her bindass attitude. We wish her all the best and may she create a storm inside the Bigg Boss 14 house. Stay tuned!

(The above story first appeared on LatestLY on Oct 25, 2020 10:00 PM IST. For more news and updates on politics, world, sports, entertainment and lifestyle, log on to our website latestly.com).