Actor Shaheer Sheikh, who is part of the ongoing show "Kuch Rang Pyar Ke Aise Bhi: Nayi Kahani" shares his thoughts about the importance of anniversaries and other such dates. 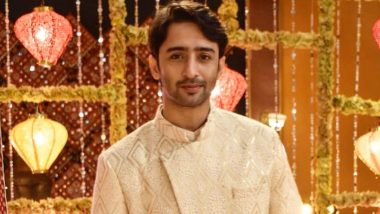 Actor Shaheer Sheikh, who is part of the ongoing show Kuch Rang Pyar Ke Aise Bhi: Nayi Kahani shares his thoughts about the importance of anniversaries and other such dates. The upcoming track of the show reveals how Shaheer as Dev and Sonakshi (played by Erica Fernandes) have started taking each other for granted. They celebrate their anniversary very late in the day. Shaheer Sheikh Breaks His Silence on Replacing Sushant Singh Rajput As Manav in Pavitra Rishta 2, Here’s What He Penned.

Shaheer shares his personal take on this sub plot and also the relevance of these minute things in a relationship. "I usually tend to miss out on significant dates and anniversaries, and realise only when someone reminds me. But I would suggest that one should acknowledge and celebrate milestones in a relationship," he says. Pavitra Rishta 2: Shaheer Sheikh Replaces Late Sushant Singh Rajput as Manav; Ankita Lokhande Back As Archana as Shoot Begins.

He adds: "Time doesn't stand still anyone. With time we evolve and our priorities change. Remembering these dates and celebrating anniversaries can also help in keeping the spark of a relationship alive. Even though one or other thing occupies one's mind and time, it is important for a couple to prioritise their relationship over everything else." This show airs on Sony Entertainment Television.

(The above story first appeared on LatestLY on Jul 14, 2021 07:15 PM IST. For more news and updates on politics, world, sports, entertainment and lifestyle, log on to our website latestly.com).