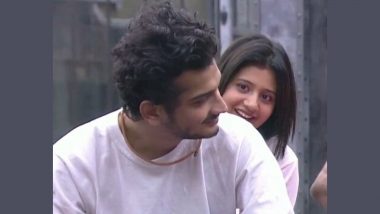 Mumbai, May 8: The 'Kacha Badam' fame social media influencer Anjali Arora who becomes the second runner of the show Lock Upp says her special bond with the winner of the show Munawar Faruqui is the great achievement she has from the show. Lock Upp Season 1 Winner: Munawar Faruqui Wins Kangana Ranaut’s Reality Show; Netizens Congratulate The Comedian On Twitter (View Pics).

Being a social media influencer, while she already had followers on social media, during the show she also gained a lot of popularity for her on-screen chemistry and cute moments with Munawar Faruqui and even fans named them 'Munjali'.

Anjali told IANS: "I know fans are talking about us because that was the real and pure bond we had on the show; because when a friendship is pure, it comes across on-screen. I do not know how we will take it to the next level but he is a friend for life." Lock Upp: Prince Narula Tells Munawar Faruqui and Anjali Arora to End Their Relationship.

Initially, Anjali came across as someone soft-spoken and introverted though eventually, she got her mind game right. She said that is the change happened to her because of the show.

"Understanding the human mind is the biggest lesson I have learned from the show, and I will be using it in any professional life. There will be opportunities and people could manipulate the truth but there comes the ability to judge the right people and opportunities. This game taught me that," said Anjali.

Lock Upp started on February 27, hosted by Kangana Ranaut, with 20 participants and after 72 days of its streaming on MX Player and ALTBalaji, the winner was announced on Saturday midnight.

Munawar Faruqui won the show, Payal Rohatgi is the first runner-up and Anjali Arora is the second runner-up.

(The above story first appeared on LatestLY on May 08, 2022 12:20 PM IST. For more news and updates on politics, world, sports, entertainment and lifestyle, log on to our website latestly.com).