She is Masterchef Australia’s youngest winner ever at the age of 22 and this is just another feather in her already decorated cap. Larissa not only clinches the title of winning one of the most viewed cookery shows globally, but also takes home a staggering $250,000 in prize money. 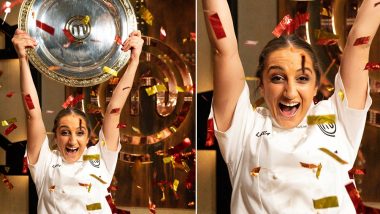 Check Out Larissa’s Winning Moment Below:

Revealing what she plans to do with her $250,000 cash prize, Larissa told news.com.au, that ‘she plans to put the prize money to good use by starting a paddock to plate farm and restaurant in Sydney’s northwest.’

Speaking of the final task, the top 3 contestants were tasked with preparing a three-course meal for 20 people. And the competition too was quite close to Larissa and Tessa scoring a tie with 27 points. The website also reported about how Larissa took home the trophy by being ahead of Tessa by just 1 point. MasterChef Australia 2018 Winner Is Indian-Origin Former Prison Guard Sashi Cheliah

The scores of the top three contenders, as reported on the website were Larissa at 85/90, first runner-up Tessa at 77/90 and second runner-up Simon at 65/90. We congratulate Larissa Tachki on her Masterchef Australia 11 win.

(The above story first appeared on LatestLY on Jul 23, 2019 05:53 PM IST. For more news and updates on politics, world, sports, entertainment and lifestyle, log on to our website latestly.com).