Naagin 5: Sharad Malhotra To Play The Male Lead Opposite Hina Khan? (Deets Inside) 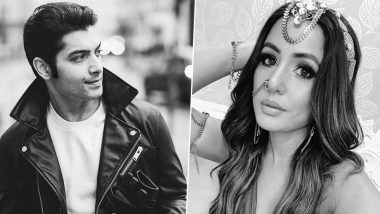 After locking in Hina Khan as her 5th season's Naagin, soap queen Ekta Kapoor has reportedly found her leading man is none other than Sharad Malhotra. Last seen in Muskaan, it id being reported that Sharad has made it to the final cut for playing the man opposite the sarvashresth naagin Hina in season 5. Other popular names that have been confirmed to being a part of the show are Hina's Hacked co-star Mohit Malhotra and Kundali Bhagya actor Dheeraj Dhoopar. Sharad Malhotra Recites a Poem That Looks Towards a Brighter Future in Tough Times of COVID-19.

A source revealed to Bombay Times, "Sharad will essay the main lead in Balaji's supernatural fantasy thriller. The actor's role will have negative traits, something he has never played before. The Banoo Main Teri Dulhann actor is extremely fit and his bearded look seems perfect for the part." Naagin 5: Hina Khan Shares Stills Of Her Bewitching Look in Ekta Kapoor's Show (View Pics).

The makers first released a teaser of a woman's face peeking from behind an entwined snake, and fans of the franchise were quick to place bets on Hina Khan and Dipika Kakar with the former winning. And soon, they released the teaser, unveiling Hina Khan as the sarvashresth naagin, which has got fans of Hina as well as the franchise extremely happy.

(The above story first appeared on LatestLY on Aug 02, 2020 04:49 PM IST. For more news and updates on politics, world, sports, entertainment and lifestyle, log on to our website latestly.com).