The ex-Bigg Boss contestant is seen in a decked up avatar with lots of chunky accessories. 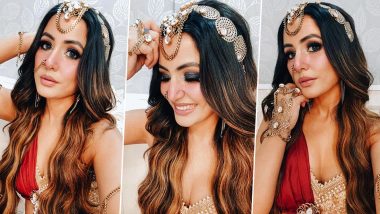 Hina Khan is always in high demand on the small screen. The hottie has been wowing her fans with different roles and achievements outside TV industry too. After her negative character of Komolika in Kasautii Zindagii Kay, the fans were waiting for her next project eagerly. The makers of Naagin 5 surprised the fans by introducing her as the leading lady. Now, the actress herself has posted the pictures of her look. Naagin 5 Promo: Hina Khan’s Look As The New Shape-Shifting Snake For Ekta Kapoor's Supernatural Show Out (Watch Video).

She looks bewitching in the stills that she shared on Instagram. The ex-Bigg Boss contestant is seen in a decked up avatar with lots of chunky accessories. She is seen wearing an ethnic attire and her long highlighted tresses catch the attention. Also, the her heavy and glittery eye make-up suits the role that she is playing of shape-shifting serpent in the supernatural show. Check out the pictures below.

Earlier, Dheeraj Dhoopar confirmed that he too is a part of this Ekta Kapoor serial. Talking to Mumbai Mirror, he had revealed, "Naagin has emerged as a big brand and I didn’t think twice before giving my nod. I am a fan of the hot Naagin ladies... my favourite part of the show is watching them dance." Well, now that the cast of the fifth part of the popular show is here, HK fans are sure to have a visual treat!

(The above story first appeared on LatestLY on Jul 30, 2020 11:57 PM IST. For more news and updates on politics, world, sports, entertainment and lifestyle, log on to our website latestly.com).