Interesting series and movies are lined up for release as we take a look at the OTT releases of the week and the very first anticipated release is the Amazon Original series Modern Love Mumbai which is slated to release on May 13. 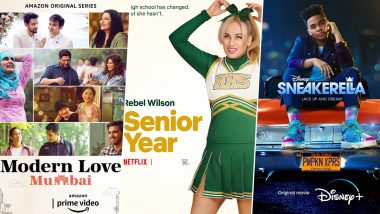 Next release to look forward to is Rebel Wilson's Senior Year which is all set to premiere on Netflix on May 13. Senior Year is Rebel Wilson’s first leading role in a comedy movie since The Hustle, a film she starred in alongside Anne Hathaway in 2019. Other OTT releases of the week include Savage Beauty on Netflix, Aadha Ishq on Voot Select, Bengali show Mahabharat Murders on Hoichoi and more. Acharya: Producers of Chiranjeevi, Ram Charan’s Film Go for Early OTT Release To Make Up for Theatrical Losses.

(The above story first appeared on LatestLY on May 08, 2022 09:45 PM IST. For more news and updates on politics, world, sports, entertainment and lifestyle, log on to our website latestly.com).