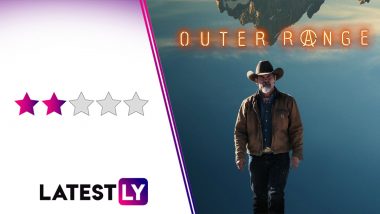 Outer Range Series Review: Going into Outer Range I had watched no trailer or even seen a poster for it as a matter of fact. All I knew was that it starred Josh Brolin and was a modern Western in some way. I thought to myself, a Western with Brolin leading it, definitely sounds like a great pitch. But, going in I didn’t know what to expect and I got something that ended up challenging me, for both, the better and worse. Also a note, this is a review of the first two episodes. Outer Range Trailer: Josh Brolin Fights the Unknown in This Unfathomable Mystery Drama (Watch Video).

Created by Brian Watkins, Outer Range follows Royal Abbott (Josh Brolin), a rancher who out of nowhere discovers a huge unexplainable hole. At the same time, he meets a drifter by the name of Autumn (Imogen Poots), who arrives at the same when the hole is discovered. Both then get tangled up in the Abbott Ranch’s supernatural mystery.

With Royal, Josh Brolin channels his inner grumpy self, and for the most part of the show, it works. There is a lot to Abbott’s character where he puts himself up as your average old rancher, but still has a layer of gruffness to him. His inner conflict is rather hinted at than explored, and it makes for a compelling character. Given the things he goes through over here, I am interested to see the journey his character takes in the upcoming episodes.

Imogen Poots also gives a mysterious but charming performance as Autumn. Not much is known about her, but it’s the mystery that keeps the character going. There is something off about her, but you can’t exactly put your finger on it.

Most of the cast does a great job too as the Abbott family itself feels well realised. With there being a family tragedy within the family, there is a sense of tension surrounding it, and it brings a lot of character to these people. You even have the Tillerson family, who are the obligatory ‘rival’ Western family, even they feel like a natural part of the story aside from a few moments.

Although, what ultimately pulls down Outer Range is just how evasive it is of its concepts. Outer Range makes it a point to evade its supernatural elements till the end of the episode, or at least the two I saw. The show is so concerned with a property line plot, that it devotes so much of its time to that rather than something more interesting.

Ultimately it makes Outer Range feel dull as I felt bored through the episodes. Nothing much interesting was happening, especially in the second, where so much of it felt like filler. It also delves into Greek mythology a bit here, which feels surface level at best.

The god Cronos is mentioned a few times, and rather than adding some symbolism to the characters or their actions, it doesn’t provide anything. Outer Range tries too hard to make itself seem deep, but it ultimately fails at it due to the surface-level exploration of its concepts. All the Old Knives Movie Review: Chris Pine and Thandiwe Newton’s Espionage Thriller is an Effective, Engaging Watch (LatestLY Exclusive).

Also, the cinematography was very lackluster here. While striking images were present during the daytime scenes, the night scenes were way too dark. I watched it on a good enough TV, and even then I had to keep on turning the brightness up to make sure what I was looking at. Overall, expected something better here.

Scenes Can Be Way Too Dark

Outer Range doesn’t do much in its first two episodes rather than throw around some interesting ideas. By the time those ideas are beginning to be explored, the viewer has almost lost interest, and that is what leads to it being dull. Thankfully, Josh Brolin’s performance and the family dynamic of the show shall keep the audiences something to look forward to while tuning in for Outer Range. The first two episodes of Outer Range premiere on April 15, 2022 on Amazon Prime Video.

(The above story first appeared on LatestLY on Apr 14, 2022 11:24 PM IST. For more news and updates on politics, world, sports, entertainment and lifestyle, log on to our website latestly.com).