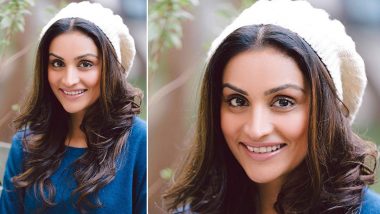 The outbreak of coronavirus, with many small and medium-budget films are opting for a digital release. Actress Purbi Joshi, who features in a quarantine special edition of "Metro Park", agrees the film industry will be affected, but she hopes in a positive way. "There's going to be a lot of changes in the near future where more precautions are going to be taken. People are going to be very wary and I think a lot of professions are going to realise that there are things they can do with technology so we don't have to be physically present," Purbi told IANS from Los Angeles. Pavitra Punia Is Missing Her Baalveer Returns Co-Stars Amid Lockdown.

She added: "So, I think a lot of that is going to affect this industry as well, where you might have more virtual meetings, where you may not necessarily be in a closed room, Zoom conferences become more popular. I think the way we even film, such a big set with so many people coming and going -- that might all be drained a lot now." Certain guidelines will have to be followed like being tested, according to Purbi. Raktanchal: Kranti Prakash Jha Dedicates His ‘Angry Young Man’ Role in MX Player Show to Amitabh Bachchan.

"You might just have a certain amount of people coming in and going out, and people getting tested before. I think that's the way it should be and that's how it's happening around the world. It definitely is going to affect the industry and hopefully in a positive way." The series, which airs on Eros Now, has five episodes of three to five minutes each, and tells the tale of a Gujarati family settled in New Jersey, USA. The show also features Ranvir Shorey, Vega Tamotia and Pitobash Tripathy.

Purbi says shooting for the quarantine edition had its own challenges. "Shooting this quarantine edition was very different from what I have ever done. It had its own challenges because you're doing it all by yourself, you put a tripod or ask a family member to help you and you're alone without any actors, trying to gauge reactions. It was definitely challenging but once we started doing it, we got a hang of it." She says it was educational as well.

"It was educational as well for me because I didn't know all the technical aspects and this kind of helped me get quite better at it and towards the end of the day, I was quite impressed with my skills. It was different, challenging and yet something that I enjoyed doing nonetheless, because I enjoy 'Metro Park' so much and I love (her character) Payal so much," she said. Purbi has worked on both the small and big screen, with credits like "Dasvidaniya" and shows such as "Dishayen" and "Comedy Circus" among many others

How has her shift from TV to film to now OTT been? "I'm an actor, an entertainer. For me, the medium has never mattered much. When I did TV, I didn't care. I did films at the same time and now again I am on OTT," she told IANS. Purbi calls it evolution. "For me it's evolution. It is recognising what's more important to me. It's never been about, 'where will this be projected'? What I'm doing is more important and the medium comes after that. It is good work that makes me happy as an actor and performer," she said.

"Working with likeminded people, people who push the envelope, who make me do things that I haven't done before, matter. I've never done anything like Metro Park and working with this amazing cast and crew. The journey has been wonderful, it's been about great learning and meeting wonderful people. I'm very happy," she added. Purbi says the medium doesn't matter, but content does. "I'm very blessed that even now I get to choose and get such fun stuff to do."

(The above story first appeared on LatestLY on May 28, 2020 12:22 PM IST. For more news and updates on politics, world, sports, entertainment and lifestyle, log on to our website latestly.com).