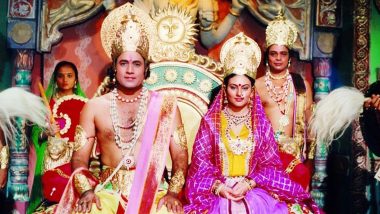 The finale episode of Ramanand Sagar's Ramayan created a new TRP record, thereby breaking the earlier ones set by Game of Thrones and The Big Bang Theory season finale. The mythological show made a smashing world record after DD National announced it to be the world's most-watched show on April 16 with 7.7 crore viewers. While it is estimated that around 19.3 million viewers watched the GOT finale, The Big Bang Theory's finale episode had generated around 23.44 million viewers which are far lesser if compared to Ramayan's 77 million.

When ZoomTV.com got in touch with the show's lead actors to get their reactions, Arun Govil and Dipika Chikhlia revealed their wishes of seeking royalties for their iconic show. "I think we deserve a lot of royalty for this. And I think naam tho bahut hua hai, saman and appreciation, people should consider that that is also required," said Dipika when asked about her reaction to the show breaking all viewership records. When Arun Govil was asked his stand on getting a royalty, the actor said, "There is nothing wrong with it, in getting a royalty, especially when something is doing so well, even commercially."  Doordarshan's Ramayan Tops All Categories In BARC Ratings For March 2020.

For the ones who are unaware, royalty is a sum paid to a patentee for the use of a patent or to an author or composer for each copy of a book sold or for each public performance of work. The TV serial was re-telecasted by DD National on March 28 after the Indian government decided to shut down TV productions and ordered a lockdown throughout the country. Since its reairing, the show has continued to witness thunderous response from all its fans and viewers.

(The above story first appeared on LatestLY on May 04, 2020 02:19 PM IST. For more news and updates on politics, world, sports, entertainment and lifestyle, log on to our website latestly.com).