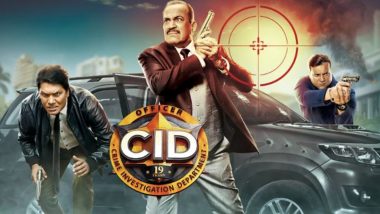 Owing to the COVID-19 lockdown, a host of old 90s shows like Ramayan, Mahabharat, Circus, Buniyaad, Dekh Bhai Dekh and Shaktimaan among others on Doordarshan have begun re-airing, thanks to vacant timeslots. Not just Doordarshan, but other channels too like Star Plus, Colors, Sony and others have resorted to airing their OTT content on channels in lieu of the vacant timeslots thanks to the halt of daily soaps shootings. Shaktimaan Re-telecast Actual Schedule, Telecast Time and Channel: Mukesh Khanna Reveals in This Video About TV Serial Airing on Doordarshan.

And the move has seemed to be the right one considering the DD shows were an audience favourite then and are now as well, not to mention that the move has come to be extremely profitable for the channel as well. And speaking of 90s TV shows, another one that will be returning to the tube is the much loved by 'audience of all age groups' show CID. Yes, you read that right. A show that ran for 22 years on Sony TV, will be back on Television.

Speaking of the show returning to the channel, lead actor Shivaji Satam, who played the enigmatic ACP Pradyuman in the show told TOI, "It makes me happy and joyous that people will again get to see and experience CID. It ran for 22 years -- that’s not something you can achieve with poor content. Our stories were so engaging for people." CID To Bid Goodbye! Here&#8217;s When The Last Episode of the Sony Channel's Crime Show is Likely to Air.

Recalling fond memories of shooting for the show and the bond that the cast forged with each other, Shivaji revealed, "Everywhere I go today, people recognise me as ACP. It was such a good experience for us as actors because we became a large family. The show saw so many actors come and go. It will be fun to relive all of that." CID Jokes and Funny Memes on ACP Pradyuman, Daya Will Be Ageless Even After the Sony TV Show Goes Off-Air After 21 Years.

(The above story first appeared on LatestLY on Apr 03, 2020 01:17 PM IST. For more news and updates on politics, world, sports, entertainment and lifestyle, log on to our website latestly.com).