There is something amiss about Kdramas and their English titles. Most of them sound like they are sweet mush-filled series but they aren't necessarily so, thematically. Today, let's talk about such Kdramas which fooled us into believing they will touch our hearts but only to rip it apart. 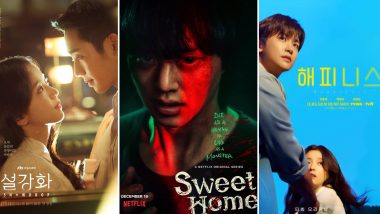 Initially, it was romantic-comedies from South Korea that were making people go gaga over it. Korean dramas which was till couple of years back enjoyed by a few became mainstream thanks to the pandemic years. Today, it's not just the feel-good happy ending Korean drama series that people are gorging on but also some dark and twisted thrillers as well. So if there's a Crash Landing On You that's getting all hearts, Beyond Evil is garnering a lot of praise. Crash Landing On You, Hotel Del Luna, Vincenzo - 5 Kdramas To Get An American Remake Soon.

But there is something amiss about K-dramas and their English titles. Most of them sound like they are sweet mush-filled series but they aren't necessarily so thematically. Today, let's talk about such K-dramas which fooled us into believing they will touch our hearts but only to rip it apart.

This is an ongoing show from South Korea which stars Jung Hae-in and Blackpink's Jisoo. While the promotional material of the series suggested a doomed relationship between a North Korean boy and South Korean girl, the series actually is set in 1987's June Democracy Movement in SK. There are romantic undertones of forbidden love between Hae-in and Jisoo but that doesn't make it a breezy show. In fact, Hae-in is actually NK spy who is taken to female university dorm by an unassuming Jisso after he gets hurt. He later takes hostage with much help from the moles in the university. He was almost ready to shoot Jisoo at one instance despite his feelings for her. Take Inspiration From BLACKPINK Jisoo’s Amazing Style File!.

This is perhaps the biggest paradox that there is. The Netflix show is called Sweet Home and all the homes are riddled with monsters. It has humans turning into dreadful blood-thirsty creatures. Cha Hyun-Su played by Nevertheless' Song Kang is a loner and moves into a small apartment after the death of his entire family. Soon his lonely days are disturbed by strange event of humans turning into monsters. He bands with the surviving mates of his building to live and fight them.

Happiness is Park Hyung-sik's first drama after his discharge from the military and it was supposed to make us delirious with happiness just like the name suggests. Instead the writers decided to shock us. The kdrama series is about a zombie outbreak and how Hyung-sik and Haan Hyo-joon fight it. The plot takes the COVID situation further by creating a world where the virus has mutated further and has now led to mad person disease. When the symptoms worsen, the infected person turn into an undead. This very disease doesn't even spare our hero... sorry for the spoiler!

Come Hug Me in its trailer gives you an impression that it's about two people who meet and bond as kids and share a tragic incident. Nobody said it will be about extreme PTSD in the heroine and a very stoic hero who doesn't want to accept feelings for the girl for her sake. The tragedy broke them differently. Although it has a happy ending, it does a number to your expectations from a series that desires a hug.

Korean drama writers and directors are a bunch of amazingly clever and intuitive people. They will use the usual romantic-comedy template to give some important messaging. While It's Okay That's Love comes across as a show that asks you to accept love is love, it also deals with severe personality disorder plots. In fact, the leads are struggling with schizophrenia and severe OCD.

These dramas are the classic lesson on not judging a series by its cover or title in this case. Sometimes they don't deliver what they promise in terms of drama titles because they are busy narrating an even better tale.

(The above story first appeared on LatestLY on Jan 14, 2022 06:04 PM IST. For more news and updates on politics, world, sports, entertainment and lifestyle, log on to our website latestly.com).