After Meghan Markle and Prince Harry exposed the British Royal Family on Oprah Winfrey's Show, it was only a matter of time before Twitterati found a way to pun on it. They did and the targets were Netflix and The Crown. The people on Twitter believes the producers and the streamer must be going berserk taking notes. 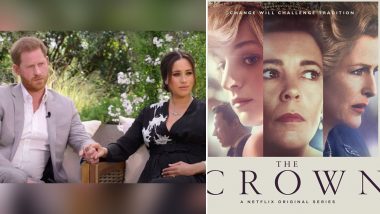 Meghan Markle and Prince Harry sat down with Oprah Winfrey for a tell-all on their time as a Royal couple and what happened after they decided to exit the monarchy. It was expected to be a massive expose but how big it could get only became apparent when the excerpts from the chat show went viral on Twitter. Everything the couple disclosed about the royal family got shocking reactions from people. It was only time before memes flooded Twitter and they did. The target here is Netflix and The Crown. Meghan Markle Accuses the British Royal Family of Racism in Oprah Winfrey Interview, Claims She Had Suicidal Thoughts During Pregnancy

The Crown chronicles Queen Elizabeth II's reign as the sovereign monarch of England and already had four seasons. The last one saw a lot of hits because it was promoted as the Lady Diana season with Emma Corrin playing the controversial and yet the most loved royalty ever. Now after Meghan Markle's statements, Twitterati is wondering if Netflix would sign her to play her in the upcoming seasons of The Crown.

Check out the funny memes on The Crown...

Netflix and The Crown producers watching Oprah do all their research for them #HarryandMeghanonOprah pic.twitter.com/7gMA3znGwH

Some more research on The Crown

Netflix and The Crown producers watching Oprah do all their research for them #HarryandMeghanonOprah pic.twitter.com/7gMA3znGwH

Just watching The Crown for real...

Me watching “The Crown” with bae pic.twitter.com/Nhn6EzPRHu

Question Of The Century: Will she, won't she?

So will Meghan play herself, do you think, in that season of "The Crown"? pic.twitter.com/ByU8YKEJfi

Buckingham Palace trying to buck up!

And the possibilities have already been predicted!

We can only say one thing after going through these memes and jokes, is Netflix listening?

(The above story first appeared on LatestLY on Mar 08, 2021 01:26 PM IST. For more news and updates on politics, world, sports, entertainment and lifestyle, log on to our website latestly.com).