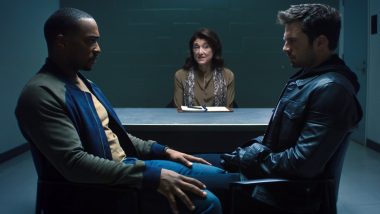 Still From The Falcon And The Winter Soldier (Photo Credits: Twitter)

Hollywood actress Amy Aquino is happy with the role Marvel Cinematic Universe (MCU) is trying to play in educating people about mental health issues. The 64-year-old actress, who plays Bucky Barnes' court-mandated therapist Dr. Christina Raynor in the new series, Falcon And The Winter Soldier, in an interview with screenrant.com, says it is "wonderful" and "helpful" that the MCU is addressing mental health. The Falcon and the Winter Soldier Episode 1 Review: Captain America’s Besties Are Off to a Flying Start! (LatestLY Exclusive).

"I think it's fascinating and really helpful that they're going in this direction, because the Marvel product has such a wide influence. I think it's wonderful and could be very helpful in terms of mental health, too - and the acceptance of mental health as just part of your health. You get your physical health, you get your mental health. One is not more embarrassing than the other. They're the same," she says. The Falcon and the Winter Soldier: From Steve Rogers’ Death to Sam as Captain America – 5 Best Fan Theories Surrounding Marvel’s Disney+ Series!

The humanising of superheroes helps people relate to them, Aquino feels, and the creators and writers are doing a good job talking about issues that are otherwise not discussed openly. "The Marvel Universe is saying, 'Okay, this guy's got a superpower, but he also has these real issues that you've seen him develop.' Nobody goes through what he did without being wounded; dramatically wounded, and he needs help. And he has to actually do the work in order to get healed," she says.

"It seems to me that the Marvel Universe is moving more in this direction of being more contemplative and wanting to delve deeply into what's going on underneath. What's going on with these people? Because they are people. They're not just robots; they're not just wizards. They are people who happen to have superpowers. And I think it goes along the lines of what they are doing with Sam's character, showing him at home with the family business; showing him being the one when the cops come up and think there's something going wrong. They assume that he's the perpetrator there," she adds.

(The above story first appeared on LatestLY on Mar 30, 2021 04:51 PM IST. For more news and updates on politics, world, sports, entertainment and lifestyle, log on to our website latestly.com).