The five-episode mini-series revolves around INA's contribution towards Indian Independence and wishes to throw light on them as the 'Forgotten Army'. 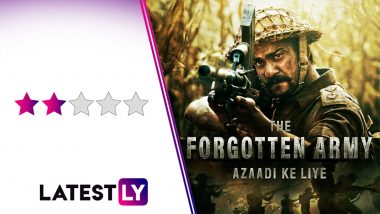 The Forgotten Army Review: Kabir Khan is a fairly known and respected filmmaker in India and when he announced that he would be directing a series on Amazon Prime relating to INA, the Subhash Chandra Bose-led Indian National Army, my expectations from the project rose higher. The five-episode mini-series revolves around INA's contribution towards Indian Independence and wishes to throw light on them as the 'Forgotten Army'. The topic at hand is a necessary story that needed to be told in a Band of Brothers (HBO miniseries) fashion but what we get instead is a very poorly written Bollywood version of it. One of the biggest problems of The Forgotten Army is that it suffers terribly in places where it gets preachy in the face without even trying to be subtle. The biggest highlight of the show is probably listening to Shah Rukh Khan's narration at the beginning of every episode which serves like a precap. The Forgotten Army Teaser: Kabir Khan's Action Drama About Netaji Subhash Chandra Bose's Army Looks Well-Crafted (Watch Video).

The series is set in two timelines which interchangeably switch, one featuring Sunny Kaushal as Captain Surinder Sodhi who hesitantly joins the INA after Japanese take over British-ruled Singapore and the other featuring an older Sodhi (M K Raina) who's back in Singapore in the 90s telling INA stories to his budding photojournalist nephew (Karanvir Malhotra) who wishes to cover the 1996 Burma student protests. It's a shame how Khan uses the situation of Burma's protests to make a point about the current situation in India with a dialogue that comes out of nowhere which shows Sodhi telling his nephew, " The struggle for freedom was ours. The struggle to preserve that freedom is yours" in the final episode.

The series doesn't quite get a hold of its tone all through the five episodes as it moves from being a history lesson to romance between Sodhi (Sunny Kaushal) and Maya's (Sharvari) character to a sexual abuse survivor and her angst all in a poorly constructed fashion. The whole portion in the series stressing on the formation of INA's Rani of Jhansi Regiment which was the all-female squad also falls flat given that the series celebrates the achievement but never really manages to portray Maya (Sharvari) or other characters in combat mode. Instead, she's seen running across a forest to find Sodhi after the British troops' attack on INA in Imphal. Despite the show focussing on INA, there's rather little coverage given to the man behind it, Subhash Chandra Bose too and it's a missed opportunity to not touch upon the many disputed things about his allegiances.

The two timelines don't mesh very well and it mesh very well and after a point, it gets obvious where the 90s story is headed given that Sodhi's romantic angle keeps popping up. As for INA's struggles, the portion where they are cut-off from resources due to heavy rains and are shown to be living in horrible circumstances with starving soldiers,  the sick and wounded, suffering from dysentery, malaria or cholera has been shot well and keeps us invested in it.

Another big problem for the series is its the background score which amps up with an Arijit Singh number every time something significant happens and completely ruins the scene. The song crops up in every episode at multiple junctures and it makes it extremely hard for the viewer to keep his concentration in a scene and irritates to the level of almost giving up on watching the show.

One of the scenes in the series also shows a fresh INA recruit trying to pull-off a sexist joke as he tries to mock the all-female regiment. His action of showing a delicate girl is called out by one of the female recruits (TJ Bhanu) who suddenly breaks into a monologue of women being more powerful where she also shares her account of being sexually assaulted. While it seemed like a good thing to show how she called him out, later, showing the same duo falling for each other felt like a big mistake though.

Khan keeps pushing archival footage in between which looks way more interesting and should have been more than the poor dramatisation of the events. The CGI is extremely poor too. Towards the very beginning where we see Sodhi being brought to Red Fort as a Prisoner of War, there's a good exchange between two prison guards who discuss why the members of INA are being treated as traitors and I strongly felt we needed to see more dialogue on this than just the history of their contribution. Abhishek Bachchan’s Breathe 2, Mirzapur 2, Saif Ali Khan’s Dilli Teasers Out, Amazon Prime Video India Announces 14 Originals.

Check Out the Trailer of Forgotten Army:

Sunny Kaushal impressed everyone with his Bollywood debut, Gold and does a good job in this mini-series too. As Captain Sodhi, he is convincing and delivers the monologues of encouraging his troops to carry on in dire circumstances quite well.

Rohit Chaudhary's Arshad brings the laughs in-betweens and his bromance with Sodhi's character is well-executed. As for Sharvari Wagh, she doesn't stand out particularly in her role as Maya.

The Forgotten Army feels like a missed opportunity at creating something credible in terms of history as well as relevant for the current times. The Kabir Khan show lacks the depth, research and the flawless execution required to make this hidden piece of the history interesting. While Shah Rukh Khan's narration helps in getting us invested, it is Arijit Singh's anthem that makes us want to shut this series midway. Sadly for Sunny Kaushal, it is a good performance wasted in disappointing series.

(The above story first appeared on LatestLY on Jan 24, 2020 08:00 AM IST. For more news and updates on politics, world, sports, entertainment and lifestyle, log on to our website latestly.com).