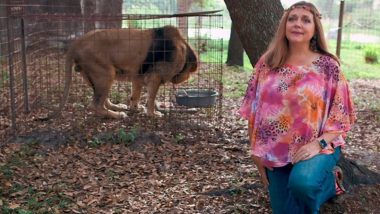 Carole Baskin, who became a pop culture sensation due to Netflix's docuseries 'Tiger King', is being sued for defamation by a former assistant. According to the Hollywood Reporter, as part of the lawsuit, the daughters of Baskin's former husband are seeking more information about what happened to their father, who disappeared mysteriously more than two decades ago. Don Lewis's three daughters, Donna Pettis, Lynda Sanchez and Gale Rathbone along with his former assistant Anne McQueen filed an amended complaint to the earlier lawsuit. Nicolas Cage Is All Set to Play Joe Exotic in Tiger King Star’s Scripted Series at Amazon

The lawsuit says that Baskin defamed McQueen by posting a video on YouTube earlier this month, in which she accuses McQueen of playing a role in Lewis's disappearance. The lawsuit also said similar statements and embezzlement allegations were also made on the Carole Baskin's website, 'bigcatrescue.org'. It also includes Baskin's current husband and her tiger rescue sanctuary as defendants. As reported by The Hollywood Reporter, the lawsuit is also seeking what is known as a 'pure bill of discovery', which allows information in a case to gather before a civil complaint is filed. Kevin Bacon Wants to Play Joe Exotic in a Tiger King Movie

The lawsuit added that the pure bill of discovery "will be useful to identify potential defendants and theories of liability and to obtain information necessary for meeting a condition precedent to filing suit". The popular Netflix's documentary series 'Tiger King: Murder, Mayhem and Madness' is about a former Oklahoma zookeeper, Joseph Allen Maldonado-Passage, famously known as 'Joe Exotic'.

The documentary extensively covers the rivalry between Maldonado and Baskin, the conviction of Joe for trying to recruit someone to kill Baskin, who accused the Oklahoma Zoo of abusing animals and selling big cat cubs. Maldonado in reprisal raised questions over the mysterious disappearance of her husband and the possibility of Baskin killing her husband and feeding him to the tigers. As per The Hollywood reporter, following the popularity of this docuseries, the Hillsborough County Sheriff Chad Chronister announced, in March, that his office was seeking new leads.