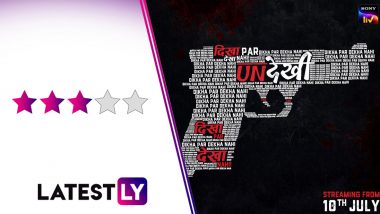 Undekhi Review: Undekhi is a crime-thriller series based on real-life incidents. Actually the crux of the series is inspired by a shocking incident that happened in Uttar Pradesh last year. A dancer girl was shot dead during a wedding party by one of the guests in a drunken revelry. The incident sent waves of shock across the country, but no one really followed what happened after that. Did the dead girl get the justice she or her kin deserved? Will the powerful in her case get punished? After the arrest of two accused, did any of the media followed the case diligently? Your Honor Review: Jimmy Sheirgill’s Web-Series Is Intriguing but Suffers From a Passable Execution.

The same type of questions come to your mind as you watch Undekhi, a gripping saga, that ultimately leaves you depressed in trying to reflect reality. A high-profile wedding is happening in a resort in Manali. The owners of the resort, the Atwals are getting their son Daman (Ankur Rathee) married to his girlfriend Teji (Anchal Singh), daughter of another rich family.

During the stag party, the groom's perpetually inebriated Papaji (Harsh Chhaya) shoots one of the two dancer girls in a drunken revelry, killing her instantly. His nephew Rinku (Surya Sharma), who runs the resort, tries to hide the crime, and takes the dead girl's sister, Koyal (Apeksha Porwal) in captivity. The incident is captured by the wedding photographer Rishi (Abhishek Chauhan), who now fears his life.

Meanwhile, DSP Ghosh (Dibyendu Bhattacharya) has arrived from Sundarban in search of the girls who are accused in a murder case there. He clashes with the arrogant Rinku, but feels powerless, when even the bureaucracy and the law seem to be on the latter's side. Kadakh Movie Review: Rajat Kapoor Serves an Engaging, Well-Performed Black Comedy With a Hitchcockian Flair.

Undekhi, directed by Ashish R Shukla (Siddharth Sengupta is the creator), grips you in the first episode itself. Not only is the shooting of the girl shocking, but the manner in which it is being casually swept under the rug by the onlookers make it even more harrowing. The lines are clearly drawn here between the privileged and the non-privileged. Like one character puts it, they have everything in their side. You bring a lawyer, they take in the judge. Doesn't that sound very familiar?

The first episode also introduces us to two of its most interesting characters, following who makes Undekhi an truly engrossing watch. One is DSP Ghosh, the portly Bengali officer who is put across as the series protagonist. He is brilliant, calculative and seen working hard against all odds that are stacked against him. With Bhattacharya in great form in the role, DSP Ghosh becomes an unlikely hero till the screenplay later does injustice to him and changes his one likeable character trait.

But Undekhi truly belong to its antagonist, Rinku. Thanks to the advent of webseries, we are discovering some amazing talent and now it's time to add Surya Sharma in the list. It is such a perfect casting with Sharma's towering height, his handlebar moustache and a terrifying performance making a very lethal combo. I got this sense of dread every time he appears on the screen.

Watch the Trailer of Undekhi:

What makes Rinku so dangerous is not his brashness, but his privilege mixed with a cold, calculative mind. He is someone who is fiercely loyal to Papaji, and doesn't like to leave loose ends around. He is determined to plug the holes, and he is visibly flustered when he finds a match in Ghosh. Undekhi is best when we get to see them dodge each other's moves, though the competition is fiercely one-sided.

It is not just these two characters who make the series a twisted, thrilling saga. There is Teji who is a perfect fit in the Atwal fold, even better than her fiance, with her shrewdness, only that she isn't very welcome by her in-laws for it.

We have Saloni (Ayn Zoya), Rishi's boss/friend, whose desperation makes her play her own games. Even Koyal, who feels like a hapless victim in the beginning, is revealed to have a surprising number tricks under her sleeve.

Finally, how can we forget Papaji (Chhaya gives a terrific performance here), so drunk on alcohol and privilege, whose boorish behaviour is both off-putting and entertaining (before it becomes a tad repetitive)? The man is simply a ticking time-bomb!

Slight disappointment I had was with the character of Rishi, an important main character thrown in the middle of the chaos, but is given very less depth and arc to work with. So when he does something very dangerous in the ninth episode of the series, the moment doesn't feel very hard-hitting, because you wonder why he did it.

While Undekhi is good enough in most parts, the final two episodes are very underwhelming, as it leaves too many threads open and doesn't feel like an end of a season. Rather, a closure of just another episode. A couple of minor characters are suddenly made integral to the plot, like a telephone booth operator. And a few character decisions feel very baffling, especially those taken by the supposed heroes. It is fine to have flawed ideas, but don't make them look too stupid.

Another issue is I have is that series like Undekhi, and others that I have seen on similar platforms, have good concepts and bring in good actors. But they lack a visual flair and technical approach to make them stand out from the rest. These shows deserve a more imaginative execution.

Apart from these, Undekhi, in most parts, works very well in creating enough thrill by juxtaposing a crime saga against a screwed-up wedding affair. There are plenty of bloodshed and anxiety-inducing scenes, though the scariest part was the show's depiction of the system's meek submission to privilege. The locales of Manali are well-utilised. Who thought someone would add a bloody tinge around this picturesque place? The dialogues (actor Varun Badola has penned them) are pretty coarse, but works well with the kind of rough characters that we are dealing with.

- The Final Two Episodes Are Underwhelming

- A Couple of Main Characters Are Left Underdeveloped

Applause Entertainment's Undekhi boasts of a engaging storyline, enough thrill moments and some very twisted characters, one of whom is a terrifying villain. All the 10 episodes of the web-series are streaming on SonyLIV from July 10.

(The above story first appeared on LatestLY on Jul 08, 2020 10:59 AM IST. For more news and updates on politics, world, sports, entertainment and lifestyle, log on to our website latestly.com).