Well if you have been following this Lisa Joy and Jonathan Nolan's BBC One show since season 1, then the wait for you is over as the first episode of Westworld Season 3 just dropped on HBO and Disney Plus Hotstar in India. The show followers who are very much aware of the concept of hosts and humans will dive in deep into the world of Algorithms and Artificial Intelligence . 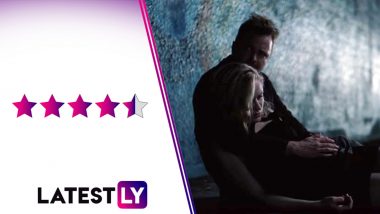 Westworld Season 3 Episode 1 Review:  Well if you have been following this BBC One show since season 1, then the wait for you is over as the first episode of Westworld Season 3 just dropped on HBO and Disney Plus Hotstar in India. The show's followers who are very much aware of the concept of hosts and humans will dive in deep into the world of Algorithms and Artificial Intelligence which is way beyond the imagination of a regular show-watcher. Breaking Bad's Aaron Paul is the fresh face and he doesn't disappoint at all with his presence. Paul plays Caleb, an ex-Military officer who is finding it hard to live in a world where automation has taken over.  Well, his character is shown miffed in his own thoughts thinking about the purpose of life and seeking someone real for a connection. Well, you would also see Evan Rachel Wood as Dolores with an impactful entry and yes she has a task to complete. Bloodshot Movie Review: Vin Diesel Is an Indestructible Superhero (Again), but This Time With Red Eyes and No Charm.

Westworld Season 3 Episode 1 titled Parce Domine (is a word derived from a Catholic chant)  takes us to a world of advanced AI where you doubt on your consciousness about the judgement who is real and who is a host. A timeline very much in the future where drones and droids serve human tasks and everything is all about programming but it is just the beginning of an oncoming war as we have old players Bernard Lowe (Jeffrey Wright) and Tessa Thompson (Charlotte Hale) having important parts to play as the narrative unfolds. Episode one starts with a bang and you are taken away by the finesse and complications of the future technology and a world driven by codes, but there are these characters who keep the narrative interesting as in what's next? Have humans been invincible by successfully conducting the infidelity test going one-step closer to immortality or is it just like the Terminator movie where AI will take over? Many things are left unanswered but the show is gripping to its core and you cannot even blink an eye to such fascinating visuals draw your attention all the way. Spenser Confidential Movie Review: Mark Wahlberg Starrer is Run Down by Predictability But Winston Duke’s Performance is the Saving Grace.

Jonathan Nolan and Lisa Joy's writing is the heart of the show as they unfold things in quite an intriguing fashion and lets the viewers sink into the surprise of the show. Unlike the first two seasons, Westworld Season 3 is more clinical with the AI technology it serves the viewers with. It's surely a must watch all the way. The Cinematography is a notch higher and the production design is literally of another league. Most of the credits go to the show's flawless editing and VFX too.

Westworld Season 3 starts off well with the first episode introducing a future world of robots and AI, while also keeping the audience's hooked to the characters of Aaron Paul & Evan Rachel Wood. The show has set a high benchmark with this dystopian world of machines and human and we certainly looking forward to where it takes Paul's character in the coming episodes.

(The above story first appeared on LatestLY on Mar 18, 2020 02:45 PM IST. For more news and updates on politics, world, sports, entertainment and lifestyle, log on to our website latestly.com).