Rajan Shahi, on YRKKH completing 12 years, said, "I feel a good team makes a good show and the positivity and enthusiasm of the team is same as it was on day one. I want to thank everyone who has been part of the show because as a producer I feel every member of the unit made it their mission to take the show forward." 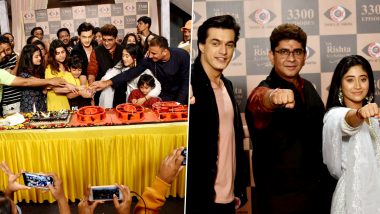 When you look back in time, it indeed feels like Rajan Shahi's popular TV show Yeh Rishta Kya Kehlata Hai on Star Plus, has been around since forever. However, the show completed 12 years on January 12, 2020. The show started off with Hina Khan and Karan Mehra, who played Akshara and Naitik respectively, when it first went on-air. It focused on their love story, family and how they dealt with their arranged marriage and turned it into love, while dealing with other challenges that life throws at them. Shivangi Joshi Bids Adieu To Naira and Yeh Rishta Kya Kehlata Hai, Her Farewell Message Will Leave You In Tears (Watch Video).

Later on, the show underwent a generation leap with the storyline moving towards their daughter Naira (Shivangi Joshi) who takes the story forward. She gets married to the love of her life Kartik (Mohsin Khan) and the story then focused on their life, how they always maintain a balance, and also parenting. Basically, the show encapsulated life in its storyline and was a massive success. Major Twist in Yeh Rishta Kya Kehlata Hai, Naira To Die In The Show (Watch Video).

And on the eve of the show completing a year, the entire cast and crew was present at the celebrations which included a puja, havan and cake-cutting, organised by the show's producer Rajan Shahi. The cast and crew celebrated with a number cake that commemorated the show completing 3300 successful episodes on-air. Yeh Rishta Kya Kehlata Hai is the Longest-Running Hindi GEC Show; Shivangi Joshi Says She Is Privileged to Be the Part of It.

Talking about the achievement, Rajan Shahi revealed, "It's a landmark day not just for Star Plus and Yeh Rishta Kya Kehlata Hai team or DKP but also for entire GECs, because on this day, January 12, not only have we completed 12 years but also 3300 episodes, which is the maximum number of episodes for any daily soap. It feels good because it has been a fruitful journey. I feel a good team makes a good show and the positivity and enthusiasm of the team is same as it was on day one. I want to thank everyone who has been part of the show because as a producer I feel every member of the unit made it their mission to take the show forward."

H continued, "I think the Yeh Rishta Kya Kehlata Hai team, represents the best in the industry. I must thank Star Plus for being a great collaborator and always believing in the show. I also want to thank the viewers who have always stood by the show. At this juncture, after the 3300 episodes, we are going to towards a turning point in the show which the audience will get to know very soon. So it feels good and I want to humbly thank everyone who has been associated with the show."

The show was recently in constant buzz over the death sequence of its leading lady Naira. It will be interesting to see how the story moves forward and how will Shivangi Joshi (in a completely different avatar) come back to a devastated Kartik. While Kartik and Naira are forever, the former's death was recently confirmed by Shiavngi Joshi in a vide message, where she thanked fans for loving her, her character and her show for all these years.

(The above story first appeared on LatestLY on Jan 13, 2021 08:49 AM IST. For more news and updates on politics, world, sports, entertainment and lifestyle, log on to our website latestly.com).