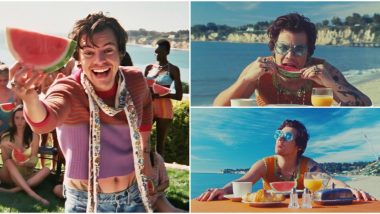 Just when we thought there was nothing good that could come of 2020, Harry Styles almost saved it for us. The singer took to social media to drop the music video of his widely-loved single, "Watermelon Sugar". Styles served us a video that is high on 1970s summer vibes and left us craving for a slice of that watermelon for sure. The music video is everything you'd expect a Harry Styles music video to be. If you thought Call Me By Your Name's peach started off a whole thing about 'fruit porn', Styles has now taken it to another level with his "Watermelon Sugar" video. Adele and Harry Styles' Vacation Pictures from the Caribbean Spark Dating Rumours and Netizens are Already Rooting for Them as a Couple!

Since the video was released online, fans have flooded Twitter with reactions, and #WatermelonSugar was soon trending worldwide. The seductive music video has worked its magic on everyone and while some are enjoying this fruity treat, some have used their creative energies to come up with hilarious memes relating to the video. After the audio track was released, many assumed that it was about oral pleasure and after being asked about the same, in an interview, Styles said, "Is that what it's about? I don't know."Harry Styles Details His Valentine's Day Mugging, Says Robbers Asked Him To Unlock His Phone.

Given Harry Styles' fan following, users couldn't stop showering praises on the same. A user wrote, "Harry Styles is the most beautiful and sweetest man to ever exist ! That’s it! that’s the tweet." Another user said, "THE HARRY STYLES VIDEOS IN THIS ERA ARE ANOTHER LEVEL AND NO ONE WILL TELL ME THE OPPOSITE." Check out more Twitter reactions here.

From CMBYN to Watermelon Sugar!

Harry Styles Feeding Watermelon Slices Is All They're Asking For!

me after realising i’ll never get to hand feed harry styles a watermelon #WatermelonSugar pic.twitter.com/BKyjjS5LvS

Never Been So Jealous Of a Watermelon:

While Harry Styles' song has already been a hit, the music video is now receiving immense love from fans and has already crossed seven million views. What did you think of this music video, share it with us in comments below.

(The above story first appeared on LatestLY on May 19, 2020 12:05 PM IST. For more news and updates on politics, world, sports, entertainment and lifestyle, log on to our website latestly.com).