Deposits of several rural banks have remained frozen for more than a month now. These banks are Yuzhou Xinminsheng Village Bank, Zhecheng Huanghuai Community Bank, Shangcai Huimin County Bank, and New Oriental Country Bank of Kaifeng. Such a drastic move could be a precursor to a larger economic challenge, foreign policy watchers said. 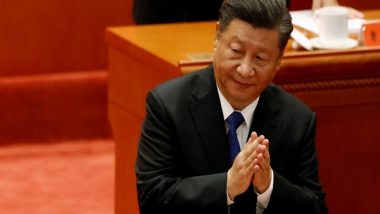 New Delhi, May 31: An unprecedented cash crisis is emerging in China's hinterland.

"The cash crisis emerging at four rural banks in the central Chinese province of Henan is every saver's worst nightmare," South China Morning Post said, adding that pictures and videos of protesters with banners demanding "return our money" have been circulating.

The health of the country's smaller and local lenders, which typically are outside any stringent monitoring system, has caused alarm.

They have been traditionally lending to the small and medium companies that have been worst impacted by the stringent zero COVID-19 approach of the government.

China's rural banks have acquired a greater degree of importance under Chinese President Xi Jinping. These banks have been responsible for boosting rural consumption and growth. Many of these small and medium firms have been export-driven. "These companies have become very vulnerable with the dwindling of the export market and choking of the supply-chain network. In turn there is a rising bad debt level in these banks, which has escaped notice," an analyst said.

However, these banks, which have been facing headwinds since the outbreak of the COVID-19 pandemic in 2020 and the slowing of the economy, remain vulnerable with high levels of bad debts. "These banks have not managed to recover from the 2020 impact," the analyst added.

Not the first time

This is not the first time that restrictions on withdrawals have been placed.

In July, 2020, the Communist Party of China had imposed restrictions on cash withdrawals from banks in the Hebei province amid a sharp rise in non-performing assets (loans that turn unproductive). The exercise, which had been taken up as a pilot project, had sent panic waves.

Amid deepening economic crisis, last week, Chinese Premier Li Keqiang addressed an unprecedented national video teleconference aimed at stabilising the economy and boosting business sentiments. The move is clearly an indication that the world's second largest economy is slipping into a panic mode.

Li in his address said that the shocks in several macroeconomic indicators which include employment generation, industrial production, are greater than those experienced during the COVID-19 pandemic outbreak.

In April China's unemployment rate stood at 6.1 per cent-the highest since February 2020. In March it was 5.8 per cent. Since January the unemployment rate in the world's second largest economy has been inching upward.

China posted an economic growth of 4.8 per cent in the January to March period of this year but macro economic indicators in the second quarter clearly reflect a worrisome picture for the world's second largest economy.

While the country has set a growth target of 5.5 per cent for the current year, most economists have indicated that Beijing will fall short of the magic number.

(The above story first appeared on LatestLY on May 31, 2022 06:37 PM IST. For more news and updates on politics, world, sports, entertainment and lifestyle, log on to our website latestly.com).