There is no established study for India estimating its quantified contribution in triggering frequent cloudbursts in the hilly regions, the Parliament was told on Monday. 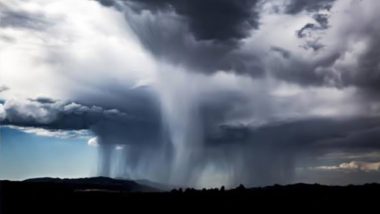 New Delhi, August 3: The government is "seized of the matter" related to frequent cloudbursts in the hilly regions of the country due to climate change effect, but there is no established study for India estimating its quantified contribution in triggering such phenomenon, the Parliament was told on Monday.

"Manifestations of extreme events, including cloudbursts, and their incidence are modelled and projected in various scientific assessments. However, there is no established study for India estimating the quantified contribution of climate change in triggering such cloudbursts.

"The science of the attribution of such extreme events to climate change is far more complex and currently an evolving subject and being closely studied by Ministry of Earth Sciences, through the Indian Institute of Tropical Meteorology and the India Meteorological Department," Minister of State for Environment, Forests and Climate Change Ashwini Kumar Choubey told Rajya Sabha member A. Vijaykumar in a written reply.

Listing some of the actions taken to minimise environmental damage due to the occurrence of such natural disasters in hilly areas, he said that the network of meteorological observations including weather stations and Doppler radars are being strengthened for better forecasting of extreme events through the IMD and the IITM.

Under the National Mission for Sustaining the Himalayan Ecosystem (NMSHE), State Climate Change Cell/Centre have been established in each of the Himalayan states which have the mandate of providing assistance to states to take up vulnerability and risk assessment, human capacity building programmes, public awareness programmes, and institutional capacity building to address the sustainability of the Himalayan ecosystem. They also assist in the implementation of actions selected for sustainable development by the States as part of their State Action Plans on Climate Change (SAPCC), Choubey added.

(The above story first appeared on LatestLY on Aug 03, 2021 11:22 AM IST. For more news and updates on politics, world, sports, entertainment and lifestyle, log on to our website latestly.com).