Activist Medha Patkar has moved a PIL in the Supreme Court for decongesting jails across the country by adopting a uniform mechanism to release inmates above 70 years of age, in the backdrop of the prevailing COVID-19 situation in the country. 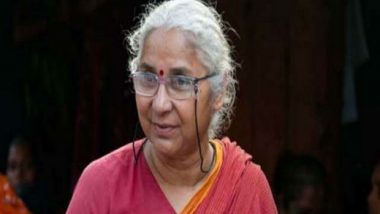 New Delhi, June 19: Activist Medha Patkar has moved a PIL in the Supreme Court for decongesting jails across the country by adopting a uniform mechanism to release inmates above 70 years of age, in the backdrop of the prevailing COVID-19 situation in the country.

The plea contends that the High Powered Committee (HPC), formed by each state in accordance with the directions issued by the top court in a suo motu case last year, did not include categorisation of prisoners on the basis of their susceptibility to the viral infection, and these prisoners should be released on an urgent basis.  Supreme Court Orders Release of Prisoners to Decongest Jails Amid COVID-19 Second Wave

"The most susceptible ones here are the aged/elderly prisoners, who have a higher chance of getting infected (specifically septuagenarian prisoners, i.e., above 70 years)," read the plea drafted by advocate S.B. Talekar and filed by advocate Vipin Nair.

The plea said that as per the National Prisons Information Portal, the total number of inmates over 70 years of age in all prisons, except for Maharashtra, Manipur and Lakshadweep, as on May 16, 2021 was 5,163, and 88 per cent of COVID-19 deaths occurred in the age group of 45 years and above.

The plea claimed that except for Madhya Pradesh, Mizoram, Bihar, Haryana and Maharashtra, none of the other states has considered releasing the elderly prisoners amid the pandemic.

The plea contended that it is pertinent to note that the condition in some of the states such as Gujarat and Rajasthan are the worst in this regard.

"Although the HPCs of Rajasthan and Gujarat have directed to release prisoners pursuant to the directions of this court, there is a need to consider the release of the elderly prisoners on the basis of their vulnerability to the infection," the plea said.

It further contended that the HPCs in some states have over-emphasised the law and order considerations as against health, and ignored the need for the release of the elderly prisoners.

The plea said that the COVID-19 response team of the Imperial College in London has reported that symptomatic individuals in their seventies are 20 times more likely to require hospitalisation than those in their twenties.

Patkar sought direction from the top court to the state governments to take immediate steps for the release of the elderly prisoners, either on interim bail or on emergency parole, to safeguard their interests.

The plea suggested that such category of prisoners can be shifted to the uncongested prisons with proper medical facilities.

(The above story first appeared on LatestLY on Jun 19, 2021 08:50 PM IST. For more news and updates on politics, world, sports, entertainment and lifestyle, log on to our website latestly.com).