The AAP on Friday alleged that the Centre is creating "artificial scarcity" of COVID-19 vaccines to benefit Bharat Biotech and Serum Institute of India, a charge termed by the Delhi BJP as "unfounded". 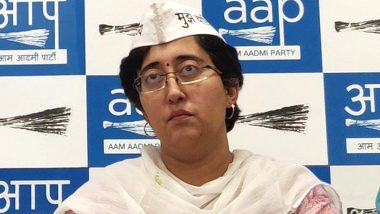 New Delhi, May 28:  The AAP on Friday alleged that the Centre is creating "artificial scarcity" of COVID-19 vaccines to benefit Bharat Biotech and Serum Institute of India, a charge termed by the Delhi BJP as "unfounded".

Addressing a press conference, AAP spokesperson Atishi said the government's vaccine drive has stopped in schools and this is the case throughout the country while in private hospitals, vaccination is still going on at different rates. COVID-19 Vaccination in India: Myths and Facts on Approval, Production, Licensing of Vaccines and More

India is currently using mainly two 'made-in India' jabs – Covishield manufactured by the Serum Institute and Covaxin of Bharat Biotech – and Russian-made Sputnik V at a smaller scale to inoculate its population. "This is big racket. At government centres where vaccination was given free to the youth, vaccines are in shortage there, while vaccinations are going on at higher prices at hospitals," she alleged.

She further questioned the Centre over not giving emergency approval to more vaccines. "Many vaccines are being approved across the world. Pfizer vaccine has been approved in 85 countries, Moderna vaccine has been approved in 46 countries and J&J is approved in 41 countries. "Then why these three vaccines were not given emergency authorisation. If WHO can approve them, why can't India? This clearly shows that the Centre has created this artificial scarcity to favour Serum Institute of India and Bharat Biotech," she alleged.

She further said these two companies do not have manufacturing capacity but the Centre has not approved more vaccines. "The Centre created such an artificial scarcity that states have to buy from them only. The Centre should respond to this," she said.

Delhi BJP Spokesperson Praveen Shankar Kapoor said Atishi's allegation is unfounded as scarcity has not been created by the government. Atishi should know that SII and Bharat Biotech don't stand to gain by the scarcity because scarcity means entry of foreign manufacturers. Creating scarcity and putting general people at discomfort is the speciality of Delhi chief minister Arvind Kejriwal, he claimed.

"He spoke on hospital beds scarcity which forced people to pay hefty fees to private hospitals, he spoke of oxygen scarcity and we saw oxygen mafia loot, we saw black marketing of COVID-19 medicines as he spoke of medicines shortage," Kapoor claimed.