The long delayed monsoon finally arrived early on Tuesday giving much needed respite to the citizens in Delhi-NCR. The national capital along with adjoining cities including - Gurgaon, Faridabad, Noida, and Ghaziabad have also received rainfall. 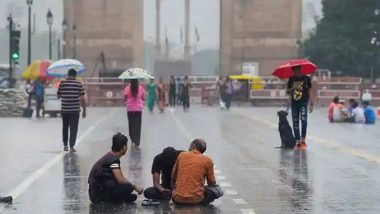 On Monday evening, the Met Department had predicted that the conditions were favourable for further advance of southwest Monsoon over Delhi, parts of West Uttar Pradesh, some more parts of Punjab, Haryana and Rajasthan.

"Thunderstorm with light to moderate intensity rain and winds with speed of 20-40 Km/h would occur over and adjoining areas of isolated places of Delhi, North-East Delhi, East Delhi, NCR (Noida, Ghaziabad), Sonipat, Aurangabad, Palwal (Haryana)," IMD had tweeted on Monday.

The South-West monsoon arrived in Delhi-NCR after India Meteorological Department's (IMD) several predictions made in the last 15 days went wrong.

Reacting to the arrival of monsoon on Tuesday, Madhavan Rajeevan, Secretary, Ministry of Earth Sciences, tweeted, "Finally Monsoon Rains over Delhi! Even though monsoon conditions were prevailing the last 2-3 days, India MET dept was waiting for these rains to declare the onset of monsoon. Last 2 days it has rained everywhere surrounding Delhi, except Delhi."

Due to the delay in the arrival of the monsoon, the MET Department had to face criticism. On July 11, Madhavan Rajeevan, responding to criticism on its wrong prediction, had said, "We just don't download someone's model forecast to provide users. We have one of the best end-to-end forecasting systems, thanks to the Monsoon Mission. Trust us, we are one of the best and we will keep improving. Our forecasts sometimes can go wrong."

This year, the rains were first predicted to make a record early march across the country, initially predicted to hit Delhi by June 13-15. But in the latter half of the month, the progress slowed down before it eventually stalled and entered a three-week break phase.

The Monsoon had reached almost all parts of the country but had stayed away from Delhi, Haryana, parts of west Uttar Pradesh and west Rajasthan. The weather forecasting agency had predicted that monsoon is expected to cover these parts by June -- a little less than a month back but that did not happen.

K Jenamani, a senior scientist at IMD has said they will study why the arrival of monsoon was delayed in Delhi despite favourable conditions.

(The above story first appeared on LatestLY on Jul 13, 2021 11:40 AM IST. For more news and updates on politics, world, sports, entertainment and lifestyle, log on to our website latestly.com).