Delhi: No Burial Space Will be Left For Muslims After 1 Year, Says DMC Report Released by Arvind Kejriwal 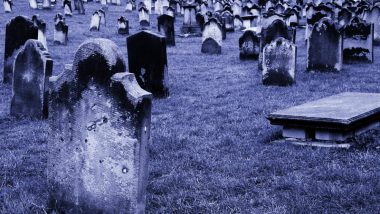 Image used for representational purpose only

New Delhi, November 23: There will be no space left for Muslim burials in the national capital after a year, a Delhi Minorities Commission (DMC) report has warned, seeking remedial measures like allocation of land and provision of temporary graves. The report was released by Delhi Chief Minister Arvind Kejriwal on Thursday. Quoting a study conducted by the commission, it pointed out that against an average of 13,000 Muslim funerals every year in the city, there were 29,370 vacancies in existing graveyards till 2017.

"This means that at the present pace, there will be no space left after one year  from now unless some remedial strategies are adopted," the report said.As per records, there are 704 Muslim graveyards in various parts of Delhi, out of which only 131 are functional. "Out of the functioning 131 graveyards, 16 are not operational due to litigation while 43 others have been encroached upon by different entities," the report said. Land Should be Utilised for Basic Infrastructure Facilities, Instead of Developing Graveyards, Says Delhi High Court.

Most graveyards in the city are small, measuring 10 bighas or less and 46 percent of them measure five bighas or less, it added. "Very few graveyards were developed in the recent past despite the growing need due to the increase in population as a result of natural growth and immigration from other parts of the country," the report said. The study on 'Problems and Status of Muslim Graveyards in Delhi' was conducted by the commission through Human Development Society in 2017.

According to the report, the findings of the study have been presented to the Delhi government, various departments and organisations to plan a remedy.

The study recommended 'kutcha' (temporary) graves, which allow re-burial in the same space after a few years, and development of new graveyards by removing encroachments. It also called for allocation of new land for graveyards, as well as taking steps like building boundary walls and having guards to prevent encroachment of the existing graveyards.