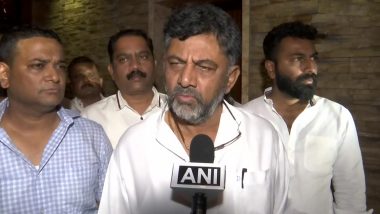 The development is seen as a major setback for Shivakumar and the Congress in Karnataka. Maharashtra Transport Minister Anil Parab’s Premises Raided by ED

The case is based on an Income Tax Department charge sheet filed against Shivakumar and others before a Bengaluru court for alleged tax evasion.

Reacting to the development, Congress MP D.K. Suresh, brother of Shivakumar, said on Thursday that the charges against his brother are politically motivated and they will not bow down before the BJP government.

"We will ask our advocate to get a copy from the court," Suresh added.

He said Shivakumar and the Congress would continue to fight the BJP government in the state.

"Let them (BJP) do everything. It has been eight years since the BJP came to power at the Centre. All institutions have been misused," Suresh said.

He added, "We don't expect justice from the BJP. We are ready to face any consequences. There is no question to fear any action."

Suresh was the only Congress candidate to win 2019 Lok Sabha elections from Karnataka.

The ED is investigating the money laundering allegations against Shivakumar for which he was sent to Tihar jail. However, later Shivakumar got bail.

The charge sheet has been submitted to the special court in New Delhi.

The ED sleuths have filed the charge sheet after more than two-and-a-half years after the raids were conducted on Shivakumar's residence and offices in Bengaluru and New Delhi.

The raids were conducted by the Income Tax department which recovered Rs eight crore in cash at his Safdarjung Road residence in New Delhi. The case was then handed over to the ED.

The ED sleuths after interrogating Shivakumar had arrested him.

With the submission of the charge sheet, sources say that there are possibilities that Shivakumar may be arrested again.

The ED case against state Congress President will have a direct impact on the 2023 state Assembly elections.

Meanwhile, the state Congress President cancelled all his programmes on Thursday and took part in 'Chandika Homam' (worship to Maa Durga) along with family members.

Family sources said the religious function is being organised every year by Shivakumar.

(The above story first appeared on LatestLY on May 26, 2022 03:34 PM IST. For more news and updates on politics, world, sports, entertainment and lifestyle, log on to our website latestly.com).