CBSE to Introduce Artificial Intelligence As Elective Subject for Classes 8, 9 & 10

A CBSE official reported that the idea of introducing AI as a school subject sprouted from a session held at NITI Aayon. 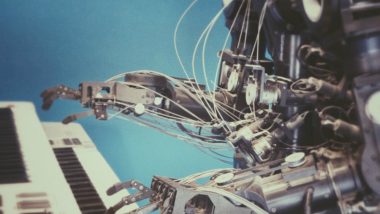 Artificial Intelligence has with time became an essential part of our daily life since technology is used in a wide area of day to day services. The younger generations are the one to give a shape to the AI technique. Hence, it is significant for schools to introduce the concept to their curriculum. While the debate regarding the teaching methodology rages among educators, psychologists and parents, it is this emerging technology that is required to be noticed as well. In a bid to mould the education system, the Central Board of Secondary Education (CBSE) decided to include AI in their syllabus as an elective subject for students. Important Points to Know Before the CBSE Board Examinations.

The technology is proliferating globally, and India is among the top 15 countries in the AI battle. This evidence the need for a separate subject to be included in the school curriculum so that the students stay updated with the latest tech race. As per reports, the subject of artificial intelligence will be for class 8, 9 and 10. A member of CBSE’s governing body was quoted in a Hindustan Times report as saying, “The decision to introduce artificial intelligence as a skill subject was taken at a recent meeting of the board’s governing body. It has been decided that the subject would be introduced in classes 8, 9 and 10 as a skill subject.” CBSE Class 10 Board Exam Date Sheet Announced Online.

AI is the ability of a machine to think, learn and perform tasks as usual as human intelligence would perform such as visual perception, speech recognition and decision-making skills. Although, it is still growing, AI’s popularity has increased the urge among aspirants and researchers to reduce human effort and give the accurate and faster result. One of the CBSE officials reported that the idea of introducing AI as a school subject sprouted from a session held at NITI Aayon, the government’s policy think tank, inspired by which CBSE began to explore the concept. CBSE Class 12 Board Exam Date Sheet Announced.

“The board held consultations with stakeholders, including with a school that was already teaching the subject. Consequently, after comprehensive discussions, the board has decided to include artificial intelligence as an optional subject,” the official was quoted as saying in the same report. The syllabus for the new subject is yet to be drafted for all the three classes. Above all, CBSE has also decided to use two sets of question papers—one easy and one standard to test the ability of class 10 students in mathematics from the next academic session. The board will soon release a detailed circular on the same.

(The above story first appeared on LatestLY on Jan 04, 2019 10:00 AM IST. For more news and updates on politics, world, sports, entertainment and lifestyle, log on to our website latestly.com).