In a major setback to the Y.S. Jagan Mohan Reddy government on Thursday, a Division Bench of the Andhra Pradesh High Court, headed by Chief Justice Arup Kumar Goswami, gave green signal to the Gram Panchayat elections, which were recently cancelled by a single bench judge. 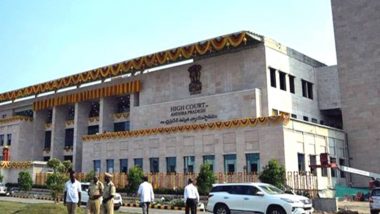 Amaravati, Jan 21: In a major setback to the Y.S. Jagan Mohan Reddy government on Thursday, a Division Bench of the Andhra Pradesh High Court, headed by Chief Justice Arup Kumar Goswami, gave green signal to the Gram Panchayat elections, which were recently cancelled by a single bench judge.

"The Division Bench of AP High Court headed by the Chief Justice cleared the decks today vide its judgment, to hold gram panchayat elections in the state," said a statement from the State Election Commission.

According to the SEC's office, the state government had already submitted a binding undertaking to a division bench of the high court that they shall do everything possible for holding the elections and also not seek change of dates.

"The State Election Commission accordingly is going ahead with gram panchayat elections as per the already notified programme. The elections will take place in four phases -- February 5, February 9, February 13 and February 17," said the statement.

Following the Court order, the SEC statement highlighted that the model code of conduct has come into effect, directing ministers not to be associated with the distribution of welfare benefits in rural areas so as not to influence the electorate.

It said that the chief secretary had already been addressed in this matter to notify the collectors.

"The commission will hold a meeting with the chief secretary and the director general of police and with district collectors and superintendents of police regarding poll arrangements at the earliest," said the statement.

However, the commission highlighted that it is particularly concerned about the safety of poll staff as well as voters.

"Comprehensive safety protocol has already been incorporated in its proceedings by way of guidance to government. Government in turn shall take all the necessary measures to ensure safety of poll staff as well as the voters fully," it said.

Without elaborating, the statement said that law and order continues to be a focus area for the commission in the light of past experiences.

Conduct of the rural local bodies' elections has emerged as a major bone of contention between the government and the State Election Commissioner Nimmagadda Ramesh Kumar.

These elections were originally supposed to have been held in 2018 when the tenure of the local bodies expired back then but were not held.

However, Chief Minister Y.S. Jagan Mohan Reddy thought of going to the polls in March 2020 but Kumar did not give the green signal citing the Coronavirus pandemic, leading to a major standoff between the two.

Reddy accused Kumar of acting at the behest of opposition leader Nara Chandrababu Naidu and even tried to replace him, which backfired as the SEC has Constitutional protection similar to a Supreme Court judge.

With just two more months left as the SEC, Kumar is keen on conducting the polls which the state government is opposing, citing the Coronavirus pandemic and the gigantic vaccination drive.

It remains to be seen what new developments will transpire as some stakeholders have already given feelers that the apex court will be approached to halt the elections.

(The above story first appeared on LatestLY on Jan 21, 2021 04:22 PM IST. For more news and updates on politics, world, sports, entertainment and lifestyle, log on to our website latestly.com).