The ballot paper voting system ceases to exist in India barring a few micro-level rural institutes. Under the electronic voting machines, the counting of votes is faster, and the menace of booth capturing and stealing of ballot boxes has been eliminated. 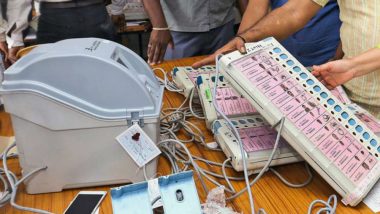 Patna, October 21: With barely a week remaining for the assembly elections to commence in Bihar, the Election Commission of India (ECI) is taking measures to educate the voters. On Twitter timeline, an old clip of the polling body was highlighted, which provides a tutorial to the electorate on how to use the electronic voting machines (EVMs) and the voter verified paper audit trail (VVPAT).

The video shows how a registered voter can use the EVMs to cast his or her vote at the polling station on the day of polls. The voting choice gets verified through the VVPAT. The clip below explains how the system works. Opinion Poll: BJP-JDU+ to Win 133-143, RJD-Congress-Left to Bag 88-98 Seats.

How to Vote Using EVM and VVPAT?

The ballot paper voting system ceases to exist in India barring a few micro-level rural institutes. Under the electronic voting machines, the counting of votes is faster, and the menace of booth capturing and stealing of ballot boxes has been eliminated.

To cast vote using the EVM, a voter needs to visit the polling booth on the day of polls. If he or she is registered as an electorate from the constituency, the voter will be permitted to enter inside the booth. After the finger is inked by officials, the voter is allowed to enter the box where the EVM is placed.

One should press the button on EVM which is adjacent to the name and symbol of the preferred candidate. A light is flashed on the machine to indicate that the vote has been cast.

After using the EVM, one can check the VVPAT machine placed on its side. A slip with the name and symbol of the candidate - whom the voter voted for - would appear below the transparent glass pane. The slip would be visible for a few seconds, and then it would be cut-off and stored in the box below. The system allows the voter to verify whether the vote has been registered in favour of the candidate whom he or she voted.

(The above story first appeared on LatestLY on Oct 21, 2020 06:02 PM IST. For more news and updates on politics, world, sports, entertainment and lifestyle, log on to our website latestly.com).