The national airlines has also prepared a list of government defaulters in order to recover money from them, said the report. The loss making airlines' list of defaulters include premium government agencies like CBI, Enforcement Directorate, IB, Customs Officers, Indian Audit Board and others. 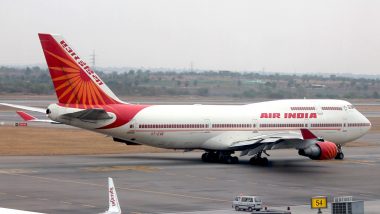 New Delhi, December 26: National carrier Air India, for the first time in its over 70 years existence, has decided to not issue tickets to personnel and officials of government agencies that owe money to the national carrier. According to a source related to the airline quoted by The Times of India, various government agencies owe over Rs 268 crore to Air India as dues pending for tickets purchased. The national airlines has also prepared a list of government defaulters in order to recover money from them, said the report. Air India Becomes World’s First Airline to Use TaxiBot on AI 665 Delhi-Mumbai Flight With Passengers Onboard.

The loss making airlines' list of defaulters include premium government agencies like CBI, Enforcement Directorate, IB, Customs Officers, Indian Audit Board and the Border Security Force (BSF). Air India has decided that any official from defaulting agencies who owes more than Rs 10 lakh will have to pay upfront and will be allowed to fly only after clearing the dues. Air India Crises: 120 Airbus A-320 Pilots Tender Resignation After Salary Hike Denied.

The only exception to the rule are personnel and officials from Airport Authority of India (AAI), Civil Aviation Industry, Labour Commission and Lok Sabha. Sources in the know said that these agencies have been kept away from the rule as Air India is largely dependent on these institutions for its survival.

Meanwhile, crisis at Air India continues as a day after pilots of Air India (AI) wrote a letter to the Aviation Minister Hardeep Puri over unpaid salaries, the Aircraft Maintenance Engineers (AMEs) are resigning from the national carrier over the prevailing uncertainty on the future of airline as Air India management order stated.

Earlier, ANI reported that as per AI Indian Commercial Pilots Association (ICPA), “65 pilots of Air India have tendered their resignation as of now and are serving the six months notice period which is due for completion very soon. Most of these pilots are experienced CAT 3 B qualified co-pilots and they are potential commanders.”

(The above story first appeared on LatestLY on Dec 26, 2019 05:08 PM IST. For more news and updates on politics, world, sports, entertainment and lifestyle, log on to our website latestly.com).