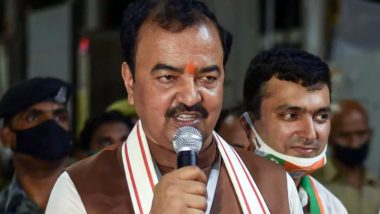 Keshav Prasad Maurya (Photo Credits: PTI)
Lucknow. January 22: Deputy Chief Minister Keshav Prasad Maurya on Saturday launched a scathing attack on Samajwadi Party chief Akhilesh Yadav, saying that the Samajwadi Party had already sensed his defeat in the first phase of elections. " This is why Akhilesh Yadav was nervous about contesting elections earlier and now he is also nervous about releasing the list, " remarked Maurya.
He said that even after March 10, the exodus of rioters, mafia, goons and corrupt will continue from the state. Uttar Pradesh always loved development and progress, which only a BJP government could provide.  Uttar Pradesh: Earlier Traders and People Used to Migrate, Now Criminals, Says CM Yogi Adityanath.
The UP Deputy CM said that it had been for everyone to witness how BJP government of Uttar Pradesh ensured progress of farmers, youth, women, poor and underprivileged in the state since 2017. Those who forced the people of Uttar Pradesh to migrate were themselves on the run today. "The exodus of such people will continue in Uttar Pradesh, because UP again demands BJP government, " he said.
Referring to the achievements of the BJP government, the Deputy CM said that SP chief Akhilesh Yadav should understand that his party stood no chance it was the time to return home.
"Jan Jan Ki Yahi Pukar, UP Maange Phir Bhajpa Sarkaar, he said while responding to the questions of journalists in Lucknow.
Taking a jibe at the opposition Samajwadi Party, he said that the BJP's wind is blowing in Uttar Pradesh mitigating the SP politics of deceit and false promises.
To a query, the Deputy CM said that the Samajwadi Party was full of goons, criminals, mafia, corrupt and rioters." This is why Akhilesh Yadav is now panicking about the release of the list of candidates, " he pointed out, adding " he is bound to panic because he kept sleeping for five years and has come to contest the elections in UP."
He said that the previous SP government had scams in the pension and PF of government employees. "The public has not forgotten the tenure of such a Samajwadi Party government, " he said.
Keshav Prasad Maurya, said there was time before 2017, when farmers used to commit suicide in UP. before the year 2017. "Today UP is number one in wheat, potato, vegetable, fruit and oilseeds production. After independence, for the first time in the BJP government, farmers have got the gift of Kisan Samman Nidhi. Farmers doing advanced farming were given respect. Tractors were distributed to them as gifts. The government bought paddy and wheat directly from the farmers and made the payment directly into their accounts, he said.

(The above story first appeared on LatestLY on Jan 22, 2022 04:36 PM IST. For more news and updates on politics, world, sports, entertainment and lifestyle, log on to our website latestly.com).