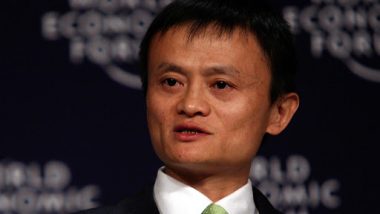 Gurugram, July 26: Alibaba and its founder Jack Ma has been summoned by a Gurugram Court after a former employee alleged that he was fired for objecting censorship and fake news on company's applications. The case is filed in Gurugram district court and Judge Sonia Sheokand has issued summons to Alibaba, Jack Ma and others and asked them to appear on July 29, Reuters reported. 'ShareIt Lite, Bigo Lite, Helo Lite, VFY Lite': Lighter Versions of Banned Chinese Mobile Apps Removed from Google Play Store and Apple App Store.

The Judge has also sought written response from the firm. Parmar worked at the UC Web office in Gurugram until October 2017 and is seeking damages worth $2,68,000. This development comes as the latest hurdle for UC Web after the Centre's app ban.

Last month, the Home Ministry had banned 59 Chinese mobile apps including UC Browser, UC News and TikTok saying that they were "prejudicial to the sovereignty, integrity, and security of the country." After this, Chinese companies started laying off staff in India.

(The above story first appeared on LatestLY on Jul 26, 2020 12:39 PM IST. For more news and updates on politics, world, sports, entertainment and lifestyle, log on to our website latestly.com).