The Andhra Pradesh government has decided to implement CBSE system for classes 1 to 7 in all its schools from the 2021-22 academic year. 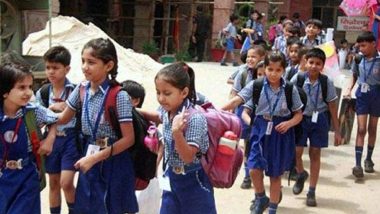 Amaravati, Feb 25: The Andhra Pradesh government has decided to implement CBSE system for classes 1 to 7 in all its schools from the 2021-22 academic year.

The system will be gradually increased year-wise from classes 8 to 10.

By the year 2024, all classes from 1 to 10 will be under CBSE, a release from the Chief Ministers Office said. Delhi: All Nursery to Class 2 Students To Be Promoted, No Offline Exams for Students Till Class 8.

The move comes amid an ongoing litigation in the Supreme Court against the conversion of all government schools, from classes 1 to 6, to English medium, a move that has caused widespread resentment.

The latest decision by Chief Minister Y S Jagan Mohan Reddy to switch over to the Central Board of Secondary Education is seen as a move on the sly to completely do away with the Telugu medium of education. Under CBSE, Telugu is only a subject taught and the curriculum will be in Hindi or English medium.

The government did not specify whether it will do away with the state syllabus completely or introduce CBSE system parallel to it.

While Principal Secretary (School Education) B Rajsekhar did not respond to queries on the issue, a senior official in the department told PTI that introduction of CBSE system was "only a proposal."

"This is only one of the proposals we discussed at a meeting with the Chief Minister on Wednesday. We have to study the pros and cons before going ahead, so no final decision has been taken in this regard," the official said. But the CMO clearly said in its release that "the state government will implement CBSE system from 2021-22 academic year."