Arvind Kejriwal Chairs Meeting of Delhi Urban Shelter Improvement Board, Says ‘We Have To Provide Shelter to Every Poor in Delhi’

The houses will be multi-storeyed, and five separate tenders will be called each in a lot of 8000 houses. The time frame for the construction of houses in the first phase is 24 months, with a construction cost of Rs. 3312 Crores for 41400 flats. 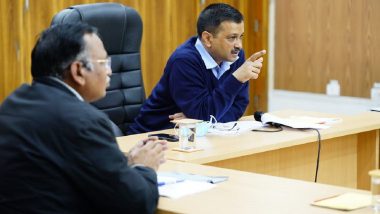 New Delhi, January 21: Chief Minister Arvind Kejriwal on Thursday chaired a meeting of the Delhi Urban Shelter Improvement Board (DUSIB), to review the status of the on-going JJ cluster rehabilitation plan under Mukhyamantri Awas Yojana. He instructed the officials to expeditiously allot the flats that have been constructed for the EWS and slum dwellers. He also said that all obstacles in the allotment of land required for the construction of these flats should be removed.

A total of 9315 house inventory is in a ready-to-move condition for 14 identified JJ clusters. Apart from these, a total of 28910 are being constructed for 73 identified JJ clusters. The meeting was also attended by Delhi Urban Development Minister and DUSIB Vice-Chairperson Satyendar Jain, along with other Delhi government officials and DUSIB board members. Arvind Kejriwal Govt Approves 18 Advanced Ventilators for ICUs at GB Pant Hospital To Improve Healthcare Infrastructure in Delhi.

CM Arvind Kejriwal said, "We have to ensure that the construction of the EWS flats for the in-situ rehabilitation of the people is completed in its due timeline. This has to be ensured so that we can provide shelter for every poor in Delhi."

Under the 'Jahan Jhuggi, Wahin Makaan' policy of the Mukhyamantri Awas Yojana, poor families and slum dwellers will be provided new affordable flats by the Delhi government. The project will be executed and implemented by the Delhi Urban Shelter Improvement Board. The Delhi government is preparing a detailed rehabilitation and construction plan in this regard.