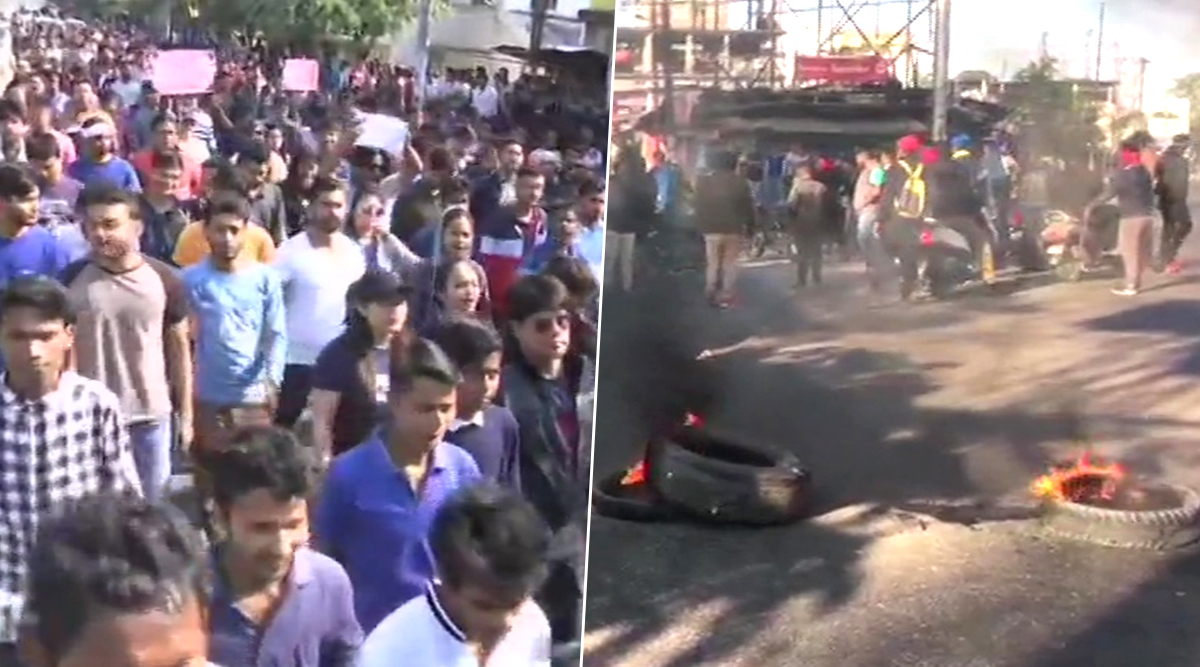 Guwahati, December 10: The passing of the Citizenship Amendment Bill 2019 in Lok Sabha has triggered massive protests in Assam. Several people belonging to different organisations have called out protests against the bill. Slogans like "Jai Assam", "take back Citizenship Bill", "go back BJP" and "go back RSS" were raised. The Bill was tabled in the lower house of Parliament by Union Home Minister Amit Shah and was passed past midnight on Monday. Assamese actors Barsha Rani Bishaya and Utpal Das also took part in demonstrations.

The All Assam Students' Union (AASU) and North East Students' Organisation (NESO), backed by various other bodies and political parties, declared a bandh in several parts of the state following which schools, colleges and other educational institutions were shut. Dibrugarh University and Gauhati University have postponed all examinations scheduled for Wednesday. In many places, demonstrators burnt tyres and blocked streets and national highways.

Members of AASU burnt effigies and copies of the bill in Guwahati. Some protesters also burnt rubber tyres on the streets. Gauhati University students wrote a message against the citizenship bill with blood. Meanwhile, the heavy police force has been deployed in the state to avoid any untoward incidents. 'Citizenship Amendment Bill Not Even .001% Against Minorities': Amit Shah Rebuts Opposition's Anti-Muslim Charge in Lok Sabha.

Assam: Locals stage a protest in Dibrugarh against #CitizenshipAmendmentBill. The Bill was passed in Lok Sabha yesterday. pic.twitter.com/4FlzRJk6U9

Assam: People stage protest in Jorabat against #CitizenshipAmendmentBill which was passed in Lok Sabha, yesterday. pic.twitter.com/gEZjGkvMBE

Assam: All Assam Students' Union (AASU) holds a protest in Dibrugarh against #CitizenshipAmendmentBill which was passed in Lok Sabha, yesterday. pic.twitter.com/En1Zl7IgzE

@ndtv Why this media is not covering the protest which is going on in @Assam. Aru u controlled by central or what this is not done.Why media is not showing the problem here pic.twitter.com/XDINoLaDdV— Gaurabsarania (@gaurabsarania) December 10, 2019

The Citizenship (Amendment) Bill, 2019, seeks to grant Indian citizenship to non-Muslim refugees from Afghanistan, Bangladesh, and Pakistan and if they faced religious persecution there. They will be given citizenship after living in the country for five years, instead of 11 years which is the current norm.