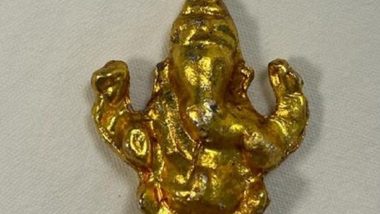 Bengaluru, July 24: A three-year-old boy who swallowed roughly 5 centimeters long lord Ganesha idol had a miraculous escape after immediate medical intervention in Bengaluru, Karnataka. The kid, Basava was rushed to the Manipal hospital on Old Airport Road on Friday. The boy had swallowed the idol while he was playing. He manifested with pain in the upper chest and difficulty in swallowing saliva. Initially, Chest and neck X ray was done, which confirmed the location and type of foreign body (Ganesh idol). Woman Thinks She Has TB, but It Was Condom Stuck in Her Lung After She Unknowingly Swallowed It During Fellatio.

Then the doctors planned to remove the idol using a flexible endoscopic approach. He was taken to the endoscopy suite within one hour and under anesthesia, the foreign body was safely removed. Subsequently, he was observed and started on feeds after 3 hours. The boy tolerated it well, without any problems. He was finally discharged in the evening.

Dr Srikanth KP, Pediatric Gastroenterologist, told IANS that the idol would have caused injury to esophagus. It could have led to perforation of esophagus, including infection in the chest. Moreover, the child was not able to swallow anything that itself would have caused many problems. Dr Manish Rai, Hospital Director at Manipal Hospitals, Old Airport Road, said, the treatment was immediate and prompt when they brought the patient to Pediatric emergency.

The necessary investigations were carried and immediately the boy was shifted to the procedure room. "Our Anesthesia team and gastroenterologist immediately performed the procedure and were able to save the boy," he underlined. The parent's timely action of noting the incident and bringing him to the hospital without wasting any time was also crucial. Parents should keep things away from children and they must also be observant, the doctors warned.

(The above story first appeared on LatestLY on Jul 24, 2021 01:41 PM IST. For more news and updates on politics, world, sports, entertainment and lifestyle, log on to our website latestly.com).