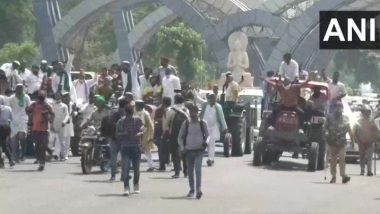 Punjab, September 25: Around 250 farmers' organisations across the country are participating in nationwide shutdown today against Farm Bills which were passed by Parliament. In Noida, the members of Bhartiya Kisan Union blocked roads, staged protests near Delhi border against the Farm Bills. The Additional DCP Noida said, "The traffic has been diverted so that people are not inconvenienced."

Rashtriya Janata Dal leader Tejashwi Yadav was seen driving a tractor, as he took part in the protest against Farm Bills on Friday. He said, "Government has made our 'anndaata' a puppet through its 'fund data'. Farm Bills are anti-farmer and have left them dejected. The government had said that they'll double farmers' income by 2022 but these Bills will make them poorer. The agriculture sector has been corporatised."

#WATCH Patna: Rashtriya Janata Dal leader Tejashwi Yadav drives a tractor, as he takes part in the protest against #FarmBills passed in the Parliament. #Bihar pic.twitter.com/3CanJjtGo4

The RJD workers were also seen riding buffaloes to protest against the fam bills.

The passage of Bills has triggered protest among farmers across the country. In Punjab, Kisan Mazdoor Sangharsh Committee is holding the 'rail roko' agitation from September 24 to 26 against the Bills. They will continue their 'rail roko' agitation in Amritsar, in protest against the Farm Bills. Bharat Bandh Today: Here's Why Farmers' Bodies Have Called For Nationwide Shutdown Against Farm Bills.

Chief Minister Captain Amarinder Singh appealed to the farmers to strictly maintain law and order, and adhere to all coronavirus safety protocols, during today’s Bandh against the Agriculture Bills.

Chief Minister Captain Amarinder Singh (in file pic) has appealed to the farmers to strictly maintain law and order, and adhere to all #COVID19 safety protocols, during today’s Bandh against the Agriculture Bills: Punjab Chief Minister's Office (CMO) pic.twitter.com/sHkEat0sH1

V.M. Singh, the convener of the All India Kisan Sangharsh Coordination Committee, who is from central UP, said "There will be nationwide unrest if MSP is not guaranteed and the food security of the poor is handed over to multinationals and corporates." He further appealed to President Ram Nath Kovind not to give assent to the bill.

13 pairs of trains have been short-terminated as a precautionary measure against the protests over the agriculture bills. We are avoiding train routes to Punjab, said BS Gill, Ambala Railway Station Director, Haryana.

(The above story first appeared on LatestLY on Sep 25, 2020 12:19 PM IST. For more news and updates on politics, world, sports, entertainment and lifestyle, log on to our website latestly.com).