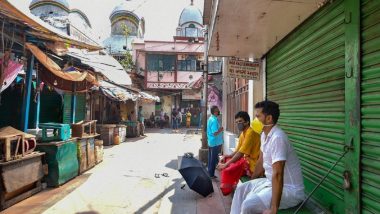 Bhopal, June 13: All religious places will be allowed to re-open from Monday, June 15 in Bhopal, said a statement issued by District Collector Tarun Pithode. The places of worship of all faiths would be allowed to operate only under strict social distancing measures. The mosques, temples, churches, gurudwaras and other religious sites are necessitated to adhere to the guidelines issued by the administration. Health Ministry Issues SOPs For Malls, Religious Places, Private Offices, Hotels and Restaurants.

The places of worship located in areas designated as containment zones will continue to remain shut, the Collector specified. The management personnel of religious places, which will reopen from Monday, are required to ensure that the social distancing norms announced by the administration are strictly followed.

All devotees are required to wear face masks throughout their visit to the place of worship. The idols inside temples are not to be touched and all forms of congregations are to be avoided. Separate prayer mats are need to be brought by all individuals visiting the mosques, officials said.

A distance of six feet needs to be maintained among all devotees, stated the order passed by the district administration. Any special functions inside the religious places, which leads to the gathering of congregations, will remain barred.

In other cities, towns and villages of Madhya Pradesh, religious places except those in containment zones were allowed to re-open from June 8. The relaxation was delayed in Bhopal as the Collector claimed that the religious leaders had sought more time to prepare for the social distancing measures as outlined in Union Health Ministry's Standard Operational Protocol.

(The above story first appeared on LatestLY on Jun 13, 2020 07:21 PM IST. For more news and updates on politics, world, sports, entertainment and lifestyle, log on to our website latestly.com).