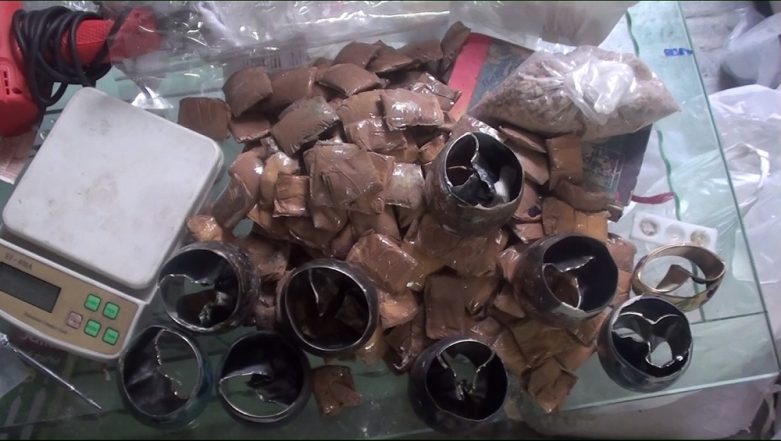 New Delhi, May 11: A day before Delhi goes to the polls in the penultimate phase of the general election, the Narcotics Control Bureau (NCB) on Saturday claimed to have seized the biggest-ever consignment of more than 1,800-kg of contraband drug pseudoephedrine -- used for manufacturing party drug methamphetamine -- outside the premises of a factory in Greater Noida and arrested three foreign nationals. The NCB also seized 2kg of cocaine.

This is the biggest seizure of pseudoephedrine/ephedrine in India by any agency, said the NCB. According to a statement issued by the NCB, the worth of the seizure is yet to be determined. including two kg of Cocaine, generally referred to as party drug. Mumbai Drugs Menace: 2 Nigerians Trying to Flee Hurt Policemen, Cocaine Seized and 1 Arrested.

On May 9, the CISF personnel at the Delhi Airport intercepted a South African woman, whom they suspected as a carrier of the contraband. The CISF alerted the NCB, Delhi. During the search of her luggage the NCB sleuths recovered a total of 24.7 kg of pseudoephedrine.

During the interrogation of the woman, the NCB stumbled upon critical information about a large quantity of drugs hidden at a location in Noida. "Pseudoephedrine is a precursor used for the manufacture of Methamphetamine, a drug widely used in Europe and South East Asia", the NCB said in a release.

The officials of the Delhi zonal unit of the NCB raided a house in Greater Noida, outside a factory, and recovered a total of 1,818 kg of pseudoephedrine and 1.9 kg of Cocaine on May 10. "This is the biggest ever seizure of pseudoephedrine in India kept outside factory premises. As per our records, this is the highest ever seizure by any agency," said the NCB statement.

Two Nigerians, a man and a woman, have been detained for questioning apart from the South African woman, who was arrested from the airport. The arrests have been made under sections of the Narcotic Drugs and Psychotropic Substances (NDPS) Act.