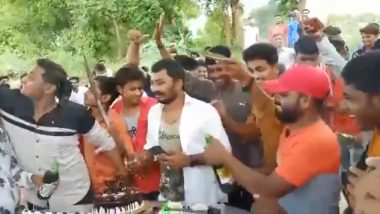 Mahisagar, July 11: In an embarrassment for the ruling Bharatiya Janata Party in dry state Gujarat, one of its district convenor threw a birthday party with lots of booze on Friday. In the video going viral on social media, Kawan Patel, BJP's district convenor for Mahisagar, used a sword to cut birthday cake as his friends poured liquor on him. Gujarat: 13 Alcohol Bottles Seized Every Minute From 'Dry' State, Liquor Worth Rs 250 Crore Seized in 2 Years.

The celebrations took at a time when the state is witnessing surge in novel coronavirus (COVID-19) cases. The group was also seen violating social distancing norms, which is one of the key methods to avoid the virus spread. Truck Carrying Alcohol in Dry State Gujarat, Topples Over in Kutch's Bhachau District.

The clip shows Kanwal Patel cutting the cut. While his friends open beer bottles and spray it on Patel and upon themselves. The party was also attended by BJP district president for Mahisagar Yogendra Mehra. Meanwhile, seven people have been arrested by the police.

Reacting to the video, Gujarat Indian National Congress president Amit Chavda tweeted "Jungle Raj". He said that social distancing norms were blown off. "The BJP government should use rules, law and power to not only harass the general public but also to keep its people in moderation," Chavda said.

(The above story first appeared on LatestLY on Jul 11, 2020 07:21 PM IST. For more news and updates on politics, world, sports, entertainment and lifestyle, log on to our website latestly.com).