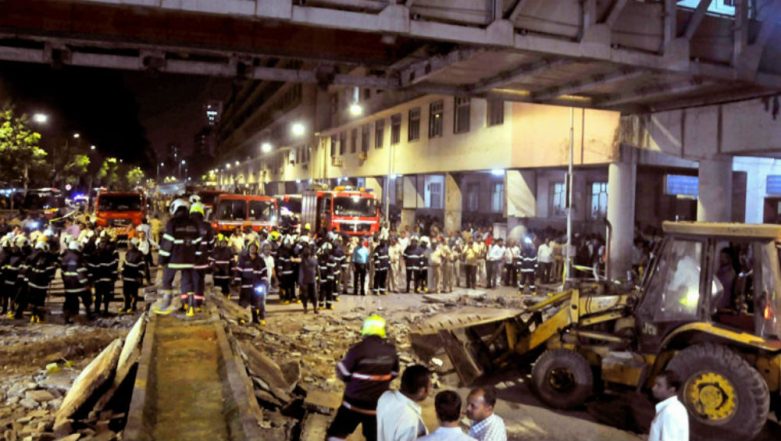 Mumbai, April 2: A Brihanmumbai Municipal Corporation (BMC) engineer was arrested by the Azad Maidan Police on Monday in connection with the Chhatrapati Shivaji Maharaj Terminus (CSMT) foot over bridge collapse in March. According to reports, the accused, S F Kakulte, working with the bridges department of the Brihanmumbai Municipal Corporation (BMC), was taken into custody after interrogation by the Azad Maidan police. Kakulte was booked under IPC section 304A (causing death by negligence), an official said. Mumbai Foot Over Bridge Collapse: 6 Dead in CSMT Station FOB Collapse; Here's A Look At Similar Recent Mishaps in The Maximum City.

According to reports, DCP Manjunath Singe, a spokesperson of the Mumbai Police, confirmed the arrest saying that they have arrested an assistant engineer and further investigation is being done by our officers. It must be noted that this is the second arrest in the case.

The police had earlier arrested structural auditor Neerajkumar Desai in the case and booked him under Section 304-II of the Indian Penal Code (culpable homicide not amounting to murder). Desai, who worked with a private firm, had allegedly gave clearance for continued use of the ill-fated bridge after a structural audit, police informed. Mumbai CSMT Foot Over Bridge Collapse: FOB Was Declared 'Fit For Use' in Audit Report Six Months Ago.

The Himalaya Bridge near CSMT collapse on March 14 killed six persons and left over 31 people injured. Reports inform that the 40-year-old FOB was under construction and had collapsed during evening rush hours. According to reports, out of the six casualties, two women were nurses at the GT Hospital. Mumbai Foot Over Bridge Collapse: Here's A Look At Similar Recent Mishaps in The Maximum City.

Soon after the tragic incident was reported, the Mumbai Police took to Twitter to alert Mumbaikars about the bridge collapse. "Foot over bridge connecting CST platform 1 north end with B T Lane near Times of India building has collapsed," the Mumbai Police tweeted. According to a preliminary report into the collapse submitted by the BMC, the structural audit of the foot overbridge at CSMT railway station in South Mumbai was not carried out correctly. The report suggested major lapses when the structural audit of the FOB was carried out on August 13, 2018.