After his remarks calling burqa an “evil custom” triggered a row, Uttar Pradesh minister Anand Swarup on Thursday backtracked, saying women should have the freedom to wear their choice of clothes. 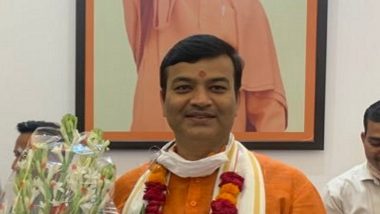 Ballia, March 25: After his remarks calling burqa an “evil custom” triggered a row, Uttar Pradesh minister Anand Swarup on Thursday backtracked, saying women should have the freedom to wear their choice of clothes.

Shukla, the Uttar Pradesh Minister of State for Parliamentary Affairs minister, had on Wednesday described the practice of wearing burqa as an "inhuman and evil custom" and compared it to the banned triple talaq. 'Burqa' is An Evil Custom, Says UP Minister Anand Swarup Shukla After Objecting to 'Azaan'.

"Women of all religions should have the freedom to choose what to wear. Nothing should be imposed on them in the name of conservatism and tradition. Religious leaders should take the society forward with the 21st century," he told reporters here.

The Muslim Women (Protection of Rights on Marriage) Act 2019 makes the practice of instant divorce through “triple talaq” among Muslims a punishable offence.

Under the provisions of the Act, a Muslim man who pronounces “triple talaq” upon his wife can be sentenced to a jail term that may extend to three years. Claiming that burqa has been banned in several Muslim countries, Shukla said Muslim women should have the right to choose whether or not to wear it and those with progressive thinking are shunning the practice.

On being asked if the government will take steps to ban burqas, he said: "This topic is about the society. Muslim religious leaders should take cognizance of this and take the opinion of Muslim women."

Earlier, Shukla had written to the Ballia district magistrate, complaining that he is facing difficulties in discharge of his duties due to loudspeakers at mosques and said their volume should be fixed according to the court orders.

Elaborating on his complaint, he said court orders restricting the use of sound amplifiers from 10 pm to 6 am should be followed and the volume should be controlled even during the daytime. Referring to the reaction of some Muslim religious leaders over his burqa remark, Shukla said he does not get perturbed by threats.