Condoms in Delhi Cabs' First-Aid Kits: Drivers Think It is Mandatory as Per Government Orders

A large number of cab drivers in Delhi-NCR keep condoms in their first-aid kit placed inside vehicles. They believe keeping condoms in the first-aid box is a mandatory norm and traffic police can penalise them for not keeping it. 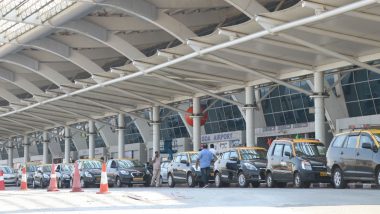 "I have heard from others that we are supposed to keep condoms. I always keep at least one," cab driver Ramesh Pal was quoted by TOI as saying. "While I have never been asked to produce a condom by a traffic policeman, sometimes I have been asked about it during the annual fitness test at the transport authority," he clarified. Uber driver Dharmendra said that he was asked to pay a fine for not carrying condoms. How to Wear a Condom – Why It’s Important to Pinch Your Condom Before Wearing It (Watch Video).

"I was challaned for not keeping condoms with me. Ever since, I am very careful," Dharmendra told the newspaper. However, the receipt of the penalty showed he was fined for over-speeding. Kamaljeet Gill, president of the Sarvodaya Driver Association of Delhi, a group working on Ola or Uber, said that it is mandatory for all public transport services to carry three condoms at all times. He added that condoms come handy in case of a minor accident.

"In case a person starts bleeding, the condom can be used to stop it. Similarly, if someone has a fracture, a condom can be tied around the area until he reaches a hospital," Gill was quoted as saying. Speaking about non-medical benefits, Gill mentioned that condom can hold up to three litres of liquid. The police and the transport department, however, made it clear that carrying condoms in cabs is not mandatory.

"There have been no instances where people were challaned for this," said a police officer. There is no mention of condoms in the Delhi Motor Vehicle Rules (1993) or Motor Vehicles Rules, 1989. An official of the transport department knew something that may have prompted cab divers to keep condoms. "NGO workers reach out to drivers outside the centre to educate them about safe sex. It is possible that drivers have developed the habit of keeping condoms from there," he said.

(The above story first appeared on LatestLY on Sep 20, 2019 12:58 PM IST. For more news and updates on politics, world, sports, entertainment and lifestyle, log on to our website latestly.com).