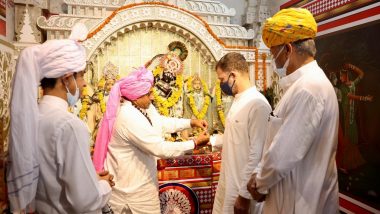 He also addressed a gathering where he greeted people on the occasion of Buddha Purnima. Sources have said that Rahul Gandhi's visit just after Chintan Shivir gives out a strong political message and also reveals Congress' concerns as the AAP in Gujarat has formed an alliance with the Bharatiya Tribal Party (BTP). Chintan Shivir: 'No Short Cut to Strengthening Links With People', Says Congress Leader Rahul Gandhi.

Tribals have been the traditional vote bank of Congress, however, after the BJP, local parties have also made a dent in it in Rajasthan. Congress suffered heavy losses in the 2018 Rajasthan Assembly and 2019 Lok Sabha elections after the rise of the BTP in the tribal-dominated seats of Banswara-Dungarpur, Pratapgarh, and Udaipur.

BTP won two seats in the 2018 polls. Congress leaders say that the BTP-AAP alliance in Gujarat can cause big losses to the party and hence Rahul Gandhi's visit. Rahul Gandhi held meetings in Banswara before the 2018 Rajasthan Assembly and 2019 Lok Sabha elections. When Sachin Pilot was PCC chief of Rajasthan, rallies of Rahul Gandhi were held in Banswara, Dungarpur, and Beneshwar.

This gathering at Beneshwar Dham is considered important with respect to making a mark in tribal area. During the Lok Sabha elections, a meeting was held in Beneshwar in April 2019, but Congress did not get a single seat. Sonia Gandhi has also had held meetings in this tribal-dominated district.

(The above story first appeared on LatestLY on May 16, 2022 02:54 PM IST. For more news and updates on politics, world, sports, entertainment and lifestyle, log on to our website latestly.com).