Section 144 will remain imposed in Mumbai till December 17 to ensure peace and avoid any kind of disruptions in public order. 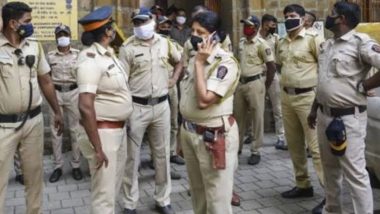 Mumbai, December 2: Mumbai police will impose curfew-like restrictions in the city, under which gatherings of five or more people will remain prohibited. Section 144 will remain imposed in Mumbai till December 17 to ensure peace and avoid any kind of disruptions in public order. Any kind of demonstrations and sloganeering has also been banned during this time.

Large gatherings had been banned in Mumbai earlier. At present, the same order has been extended until December 17. In addition to this, an arms ban has also been implemented in Mumbai from December 4 to January 2. These orders were issued by Vishal Thakur, Deputy Commissioner of Mission Department, Mumbai Police, via press release. Mumbai Police Ban Flying of Drone, Remote-Controlled Light Aircraft, Paragliders For 30 Days From November 13

The police also said that Weapons, firearms, swords, and other weapons are not permitted from December 4 to January 2. People who violate the order would face consequences, police said.

(The above story first appeared on LatestLY on Dec 02, 2022 11:18 AM IST. For more news and updates on politics, world, sports, entertainment and lifestyle, log on to our website latestly.com).