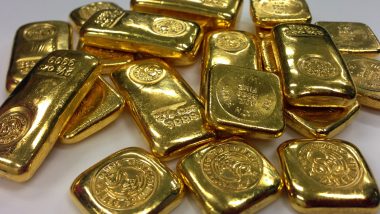 According to a senior customs official, the accused reached Lucknow Airport at around 3 a.m. from Muscat.

"On the basis of API analysis and intelligence gathering, the accused was discreetly observed from the flight and intercepted on the basis of suspicious movement. On checking his hand baggage, 27 gold bars wrapped together with red and black tapes were found. The total weight was 3,149.280 grams worth Rs 1,68,48,648," said the official. NIA and NCB Begin Investigation Into Drug Smuggling After 11 Iranians Held Off Chennai Coast.

The official further said that on the basis of interrogation, an Air India bus driver was also apprehended. The driver divulged that he was supposed to receive the said gold from the accused in the bus and smuggle it outside the airport.

The duo are being produced before the Chief Judicial Magistrate(Economic Offences).

Further investigation in the matter is on.

(The above story first appeared on LatestLY on Apr 13, 2022 11:55 AM IST. For more news and updates on politics, world, sports, entertainment and lifestyle, log on to our website latestly.com).